Book Review: THE LOVES OF CHARLES II by Jean Plaidy Part I "THE WANDERING PRINCE" 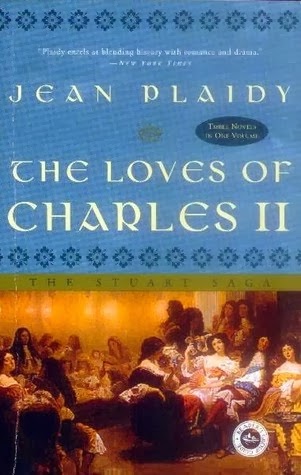 Every once in awhile I find myself in a historical fiction funk, Jean Plaidy always has a way of unfrazzling me. Her consistent writing skills are always on point and never confusing or lacking. Arleigh from Historical Fiction.com sent me this lovely jewel of a book and I am forever grateful. I have always wanted to read this book not just because I love Plaidy but for my own love of Charles II. My two favorite leading men are Charles II and Robert Dudley. To me they both are England’s historical playboys.


This book is unique in the fact that it actually is three books combined into one new reprint. The three books are “The Wandering Prince”, “A Health Unto His Majesty”, and “Here Lies Our Sovereign Lord”. It is also a part of the Stuart Saga. It is a whopper of a book at 756 pages but I can now confirm it is a well worthy read. It lived up to the mountain of hopes and expectations I laid down before reading. Charles II was a notorious lover of women it is only appropriate that it would take not one, not two, but three books just to cover the leading ladies he had through out his life.

Henriette d’Orleans and Lucy Water
“And most vivid of all, it seemed, were the figures who moved about in this perfect setting. Jewels flashed; silks and satins rustled; blue, green, and scarlet feathers drooped over shoulders and the air was filled with parfume. Fans were of brilliant colors and exquisite design: gloves were elaborately embroidered; swords were diamond hilted; spurs were of gold.”

Think back to growing up, who comes first to mind when you think of first loves? A boy from school, a kid from your neighborhood comes to mind first right? What about before you were conscious of the boy in the neighborhood…your parents, or even better a sibling that you just happen to share a special bond with? I was pleasantly surprised that Charles II first love was his baby sister “minette”, Henriette d’ Orleans.

From the very beginning this first book was all about Henriette, it was written from her point of view. Henriette was a tiny baby when England had taken a turn against her father Charles I. Opening with her daring escape to France she was only two years old. In the care of a trusted noble woman they disguised themselves and fled to France to where the banished queen Henrietta Marie was. Since the disposed queen was French it was the safest place for her to flee to. Depending on the generosity of their French relations they lived in exile in France.

At a very young age Henrietta fell in love with her 15+ year older brother Charles. It was expected for her to love him; he was easy going with a very loving and charming personality. Charles was the type of man that any woman could love because he knew the realities of women and really understood the logic behind the woman.

In exile the Stuarts suffered hardship after hardship because they were forced into relying on the charity of others. Charles I was executed by the awful Puritan Cromwell. Cromwell and the common wealth government had three of Charles I children held captive in England. With no country to call home the whole Stuart lot was forced from their home into exile. Charles II spent his days roaming the continent between his sister in Holland and his mother in France. The exile years were hard on the family and the banished queen Henrietta did not make it any easier. She actually made it worse. Her children suffered but she was too concerned with her religion to even care. She even went as far to disown her own son after he escaped captivity for making a religious promise to his father (Charles I). In my eyes the woman was just plain evil and could not be logically reasoned with.

Plaidy has a way of seamlessly bouncing between characters and this read was no different. Following all the loves of Charles to others might have been a tangled mess but this was not the case for Plaidy. From Charles sisters, mother, and his mistress Lucy Waters. Lucy must have flown under my radar but she was the one who gave birth the king’s first legitimate bastard. The child became the Duke Monmouth.

Charles loved Lucy for what she was he did not set hidden expectations on her. He just was not that kind of man. Lucy was born lusty and chance led her to Charles in Holland. Since Charles was forced to strategize and wander to get his kingdom back, it was only a matter of time before he had to move on from Holland. He did not expect Lucy to be faithful but she did try for a while and being the lusty woman that she was; it was not long before she had a replacement. I empathized with Lucy because she came across to me as a one-track kind of girl who was dumber than a box of rocks. She was built for loving and she knew this was her best quality. All things change and Lucy’s story took an unexpected turn and since I had no prior knowledge of her I was stunned and saddened by what became of Lucy.

My expectations of this book were far different in actuality. I felt like the book was more the women’s story than Charles. I think that to really get Charles II you have to fully understand the backgrounds of the many women he loved. In understanding the women and how they came into Charles life speaks volumes of his personality and who he really was.

5/5+++ Loved it! It cleared up so much for me. The big link I was missing is that Charles mother Henrietta Maria was a princess of France so technically Charles was half French. I really enjoyed “Minette's” story, I had to give this portion of the book a 5++++ because there is a twist that really got me and I LOVED it. I never even saw if coming. A highly recommended read for all. I am posting this review in sections because if I put it all together it would be the longest post in the free world so stay tuned for the next section “A health unto his Majesty”.
R-Rating sexual references.
FTC-This novel is from my personal collection.