Richard to the Duke of Buckingham: “Well, Let me tell you what our cloth merchants have begged Parliament to enact. No one below the estate of lord is to wear any gown or cloak unless it covers his genitals and buttocks while he is standing upright. A beneficial piece of legislation, no doubt, but who wants to be the fellow who has to check?”

Harry Duke of Buckingham in my previous reads has almost always been portrayed as a villain. That man who more than likely murdered the Princes in the tower. In reality I had no idea how closely related to the young princes he actually was. Being that “Harry” was married to Elizabeth Woodville’s youngest sister Kate that made the young princes his nephews by marriage. There are more relations but it is just too complicated to get into for right now. 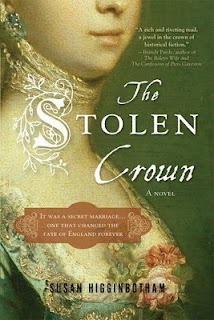 Kate and Harry married at an extremely young age and it has been previously stated that Queen Elizabeth forced Harry into the marriage. This was actually not the case here. Even at a young age the two-showed promise of a prosperous life ahead of them. They were very fond of each other but at one point Kate felt more like it was a brother and sister fondness. That did not last long for Kate knew she loved Harry and would only give herself to him, when was the real question. Eventually Kate “seduced” Harry and got her way and from there on out they were inseparable until Richard drove a wedge between them.

During the War of the Roses there were so many feuding families and death grudges that it amounted to years of blood shed and civil war in England. It is also called the “Cousins War” because it was cousins fighting cousins. Families were torn apart brother turned on brother and there were no boundaries in the War of the Roses, nothing was off limits including children and the mentally ill.

Harry in his younger years was a ward of the crown and it displeased him greatly when he became of age that King Edward would not apply him to government affairs. It left Harry a bit disgruntled and the person he vented to was his childhood friend Richard Duke of Gloucester also the kings brother. Harry was enamored of Richard and put him up on a beautiful little pedestal, Richard you know could do no wrong in his holiness. Little known to Harry at the time was that Richard had a plan and nothing would hinder him not even his own blood relatives. My heart broke with Harry and I can say this I will NEVER EVER look at the Duke of Buckingham the same again.

5/5 I know I am beginning to feel like a broken record but this is one of the gems I have been waiting for quite some time, like since last year. I am just elated; I will never look at Buckingham the same again. I have noticed a trend when it comes to War of the Roses novels; it is that Richard is either really bad or it is written very sympathetic to him. This one was no different, the spin Susan drew on Harry was more than believably real. In such a messy time with so many intertwined family feuds Harry and Kate’s story was one of real love, heartbreak, and death on all sides. At the time there was not a single household that the war had not affected, the Buckingham household was no different than the others. A must read for all War of the Roses fans Susan might just change your mind on how you view the events during the war.

Thank you Sourcebooks for sending me this lovely book!