Book Review: THE SECRET OF THE GLASS by Donna Russo Morin 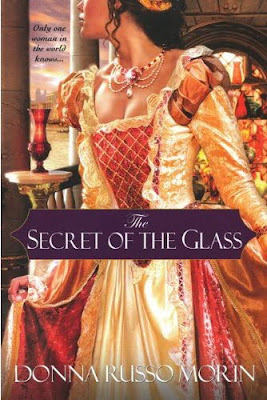 Sophia Fiolaro was the eldest child of a well-known family of glassmakers on the island of Murano. Her father came from along line of glassmakers by trade. The interesting point of being a glassmaker in the early sixteenth century is that they were isolated on the small island of Murano, which was located with in a cluster of islands in what seemed like a hop and a skip from the main land of Italy.

All of the glass makers were there but thy really seemed like content people as a whole. They had their factories and family owned shops. The people also lived prosperous lives. The government kept them isolated on the small island to prevent the secret of the glass being leaked out into the world. The motivation was mainly for financial reasons. By producing a limited amount of product it gave the gave the glassmakers wares an exclusivity air which in turn put the glass in high demand.

Since Sophia was the eldest with no brothers she was by her fathers side during his days in the factory. She was not the silly girl type; she was very quick and seemed to be able to read people pretty well. The most important things in her life were her family and glass making. It was not shocking to me that she could understand the secret of the glass. She did have at times a timid personality that she used as a defense maneuver in times of need. I believe she was just a more of a private type of person that kept things to herself. Her father and later best friend were the only people who knew of her skills. Her father Zeno put up a front like he did not know but in reality he knew. Her blissful domestic life came to a halt when a poor noble family wanted Sophia to marry their son because of the money from her father’s glass factory. Another marriage labeled as a means to an end.

After the first visit to her soon to be betroths home, Sophia knew he had no love for her in his heart. Pasquale was an older angry man that gave into no false pretenses. Uproariously it figures that he was a politician of the city of Venice in his day job and an avid Galileo follower by night. Ironically it would be Galileo who inquired into the skills of the Fiolaro family factory. He wanted a "curved piece" of glass made to his specifications. Zeno by this time began showing early stages of dementia. Sophia had to cover him during Galileo's visit. So close was the bond between father and daughter that when she saw the look in his eyes change she knew he was gone. Sophia eagerly accepted Galileo's request and since Zeno had been bed ridden since Galileo's visit Sophia had to make the pieces herself. She threw herself into the project head long to serve as a distraction from the upcoming betrothal and wedding.

After her marriage papers had been sent making her officially betrothed to Pasquale she began attending higher social functions. At a court filled with luxury and vibrancy's she found the men to be of a handsome nature. One in particular had caught her eye Teodoro Gradenigo. Tall dark and handsome it was if a force of nature that pulled her to him. They made a chance solitary first meeting when Pasquale dismissed her for his friends. Teo and Sophia stuck an instant friendship between them or was it more than that?

Sophia wanted love in her life she wanted to feel it, touch it, and live every aspect of it. How could she bring herself to marry a man who treated her like a lap dog? She knew there had to be more in her life. She yearned to turn her back on Pasquale and never look back but her fathers rapidly progressing deterioration kept her firmly planted where she stood. Sophia had a few skeletons in her closet and if anyone were to discover them her life could become forfeit. In a turn of events Sophia had no control over she felt like she was slowly losing the control she had over her life. If the opportunity became apparent where she could turn the tables on Pasquale would she be able to take control of her destiny and push head long into the unknown?

4/5 Highly recommended, a very unique read in choice of location and characters. From glassmakers, Venice politics, and Galileo unveiling his brilliant creation I found myself fully immersed into Sophia's world. I found that it did have a bit of a slow start but it was worth it. I flew through the second half because Morin took the time to really build her characters. It was a very pleasant read and it was right up alley. A strong heroine who loves her family but possessing a unique talent for creation. I really enjoyed the details of Sophia's work with the glass making. The details even down to what dress she wore it when she worked with the glass. This would be a most pleasurable read for any historical fiction lover.