Upcoming Release: Within The Hollow Crown by Margaret Campbell Barnes 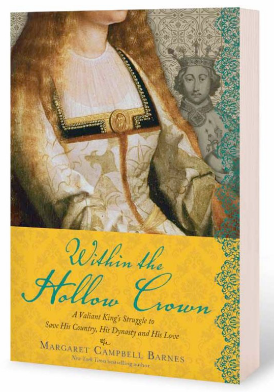 This is also another tasty read I want to get my hands on. I have been searching for a good read set in this period. Maybe this might satisfy my craving. Either way this is going to be my first read by Margaret Campbell Barnes and I am looking forward to it very much.
"Set against the backdrop of a country racked by revolt and class warfare, Within the Hollow Crown showcases the true spirit of a king at the end of one of the most glorious dynasties, who wants both England's heart and crown. Perhaps one of the most misunderstood of all English monarchs, the son of the Black Prince and grandson of Edward III has been portrayed in a dim light by history. But Margaret Campbell Barnes gives readers a different portrait of Richard II. Although his peace-loving ways set him apart from the war-mongering medieval world around him, Richard proved himself a true king by standing down a peasant revolt and outwitting the political schemes of his enemies. Struggling to uphold the valiant Plantagent dynasty, Richard and his queen, Anne of Bohemia, nonetheless manage to create an exquisite partnership, described as "one of the tenderest idylls of romance ever written."