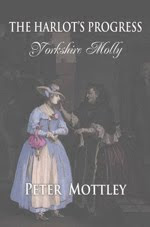 Naive seventeen year old Yorkshire Molly Huckerby left her home town behind for the hope of becoming her cousin Tom's respectable wife. Already she was an orphan having only a few sparse family members. Tom was her hope of a new life in the exciting city of London. Stepping off the wagon into the cold cruel world that was London in the 19Th century it was sending the lamb to slaughter.

Unbeknown to her at the time Molly had walked right into the lions den. She knew London could be dangerous but why was it dangerous? Being caught unaware in the midst's of predators, stalking their prey waiting for the next "Innocent" to take down. Feasting on the still living flesh was daily life in London at the times. It was kill or be killed , survival of the most primitive nature.

Molly had taken one step off the wagon and was approached by a woman she would come to know as "mother" Wickham. The woman was no nurturing mother more like the devils whore house regulator. Mother Wickham "marked" Moll and moved in for the kill right if as on cue. Offering a small refreshment inside her "fine" establishment known to the whole town as The Bell. Molly it just so happened was dropped off the wagon before it took her to her final destination (Toms house). She had her trunk and no idea how to get to Tom's carrying it. Nervously she accepted the offer. Still hesitant she went into the bell, a virgin.

A lost evening and the last thing she could remember was sitting with one of the bells other patrons, the colonel. She would never be the same after making his acquaintance. Awaking in a strange room was not the first thing she noticed. Her full nakedness, a smear of blood on her thigh, and a few guineas on the table? It all did not make sense. Not until mother Wickham paraded in stating "I always let my girls keep there first purse". Mortified Moll realized she had been set up. Tricked, partially drugged and her maiden head was gone forever. She was now a harlot. A abused possession that could be bought and sold at any time. There was no way out for her the bell had to be her home. After she had tracked her cousin down and he refused to acknowledge her as family she had no other choice. Her innocence stolen from her in the night she could never forget or forgive. Could she ever escape being forced into harlotry? With the vile and abusive colonel hot on her there was no chance of escape, her owned her. She was his to do with as he pleased until the tide had turned or an unlikely escape became apparent.

3/5 I do have to state that there should be some kind of disclaimer on this book. Brutal to the extreme, graphic rapes scenes, violent fights, and at one point graphic dominatrix acts bordering on soft porn. You ask why did I read it then? Besides the mystery of what would really happen to Moll at the Bell. I have come to the conclusion that it was like watching a train wreck. Yes it is a terrible thing to see but you can not look away. I found myself seeking time to read more and more because it was so utterly compelling. Molly the soft sweetheart abused repeatably my heart broke for her. The loss of her life with her cousin Tom was so brutal that I completely sympathized with her. I wanted her to make it and find her own place and for once be safe. Sometimes we all need a reminder of why we like other periods or people in novels. I like kings and queen because of the glamor and glitz. Poor Moll possessed none of the glitz but she did have a courageous good heart and for that I related to her. I would recommend this book if you are on the gutsy side and can stomach the violence. As for me I am looking forward to reading the next one "Annie's Quest". It did open a window to a prospective I had never ventured to see before and for that it was a good "brutal" read.

For more information on Peter Mottley read this. If you would like to see the book trailer, check it out. If you can not wait to get your hands on a copy follow one of the links below.
http://www.amazon.co.uk/gp/offer-listing/095637560X/ref=dp_olp_new?ie=UTF8&condition=new