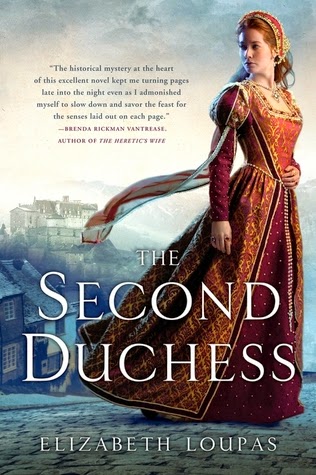 Barbara of Austria was anything but a young and extraordinarily beautiful new bride. "Imperial" Barbara was married to the Duke of Ferrara; Alfonso d’ Este. The newly married couple was older and Barbara unlike her husband was a novice. She became Alfonso’s second Duchess of Ferrara. The death of the first Duchess of Ferrara was mysterious and it was the one topic that hovered on everyone’s lips at the Ferrarese court. Lucrezia de’ Medici was a forbidden topic unless you wanted to incur the wrath of the Duke by bringing up his dead wife.

The great mystery surrounding Lucrezia’s life and death would haunt Barbara from the moment she arrived in Ferrara. To save herself from becoming a victim of her new husband she must find out the truth about the circumstances that surrounded young Lucrezia’s death. It was rumored that she had died from ill humors in the Duke’s own nunnery but behind whispering hands at court it was said she was murdered by the Duke himself. Terrified of her new husband Barbara devised a plan to safe guard herself and gain the higher hand on the cold Duke. Barbara became determined to find the truth or die trying.

5++++/5 loved it! Poison, murder for hire, scandal, and every other plot you could think of and not think of all rolled into one engrossing novel. I inhaled this novel and read it in a matter of days and since I had just finished “The Red Crown Lily” it made it all the much better. I actually got lucky and discovered this novel was already in my collection because I remember around the release of this novel that there were so many book bloggers raving about it. Now I see why they all fell in love with this novel. I am elated that I finally got the chance to read this one because this lady has a new favorite author to add list of my favorite picks. I would highly recommended this novel for intrigue lovers.

R-Rating for Violence and Sexual References
FTC- this novel is part of my personal collection.