Book Review: THE CAPTIVE QUEEN OF SCOTS by Jean Plaidy 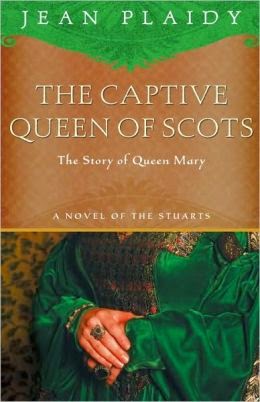 During civil war in Scotland Mary Queen of Scots fled her country for her own safety with high hopes that her queenly cousin Elizabeth I of England would aid her in regaining her throne. Mary had just escaped imprisonment at the hand of her bastard born half brother the Earl of Moray and she was desperate to recoup her losses. England was the closest escape possible. England’s virgin Queen was her only hope of saving her rule in Scotland. Mary would come to regret her decision everyday for the next eighteen years of her life.

Upon arriving in England Mary was treated with the highest respect fitting to her rank. Elizabeth later decided to go against Mary and align herself with the evil Earl of Moray. In the end it was best for Moray and Elizabth if Mary never saw Scotland or her young son ever again. Queen Elizabeth was a shrewd woman and she never forgot a slight towards her and the time had come for her to enact her revenge on Mary for proclaiming herself the “true” queen of England. It was said that Elizabeth was extremely jealous of her fair cousin and her wild love exploits. The two cousins were like night and day, Elizabeth needed no one and Mary needed to be loved by all. Mary had this quality that enchanted everyone that she came into contact with. She inspired men to do outrageous deeds for their love of her and yet it was never enough to save her from her English prison.

Plot after plot would follow Mary all of them were unsuccessful and she remained Elizabeth’s royal prisoner. Both women were Queen’s in their own right yet Elizabeth could not just do away with Mary with out a full-blown religious war because Mary was always a devout Catholic. The Catholic league of the world wanted Mary to claim England as hers and return the country back to its Catholic roots. Elizabeth could never let that happen it would literally have to happen over her dead body. A dilemma that only had one solution Mary must die but how could Elizabeth justify executing her own cousin and a royal queen like herself because if she did execute Mary an anointed Queen, Elizabeth could also be victim to the same fate. Elizabeth would be forced into quelling the Catholic uprisings in Mary’s name and there was only one way to end it all.

4/5 I waited a long time to read this novel because a whole novel on Mary’s years of imprisonment really did not seem appealing to me at the time. I was wrong, leave it to Jean Plaidy to make 18 years of imprisonment exciting and not overly drawn out. I have nothing but praise for Jean Plaidy like most historical fiction lovers. I can finally say I finished the whole Stuart series! I would recommend that this novel be read in order of the series and the sooner together the better because you tend to forget the details when you wait a long time in-between novels in any series. Together the two novels “Royal Road to Fotheringhay” and “The Captive Queen of Scots” are the complete tragic story that was Mary Queen of Scots.

PG-13 Rating for violence.
FTC- this novel is part of my personal collection.

Amazon: THE CAPTIVE QUEEN OF SCOTS by Jean Plaidy
~Lizzie~