Book Review: MADONNA OF THE SEVEN HILLS by Jean Plaidy 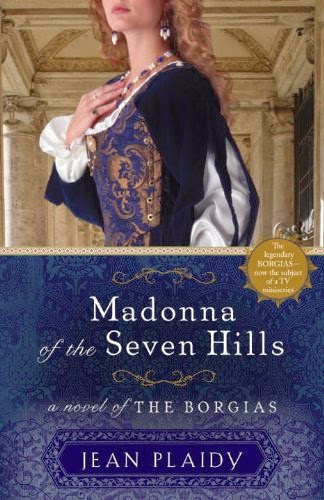 The Borgia’s are one of histories most notorious families. They were known for their many scandals that rocked Rome to its very core. Pope Alexander VI had illegitimate children before he became Pope with his long time mistress Vannozza Catanei. Alexander was the doting father and the children loved him for it. Lucrezia was the baby girl of the family and was adored by her many brothers and parents. Her brothers Cesare, Giovanni, and little Geffredo all shared a bond that was unusual from the beginning. With the exception of Cesare all of the siblings inherited their fathers carefree view of life. Anything was forgivable in the Borgia family including murder.

Lucrezia from the moment she was born was meant to love and be loved. She was the heart of the Borgia family especially her older brother Cesare’s heart. As children Cesare had an intense rivalry with his younger brother Giovanni. When she was born Cesare made it his mission to make sure that Lucrezia would always love him above all others. Through out their lives Lucrezia and Cesare had an intense type of love. Which may have been because Cesare was the dark brooding personality type where love and violence met together in a hazy grey area of emotions. No one could ever love Lucrezia like her brother could and because Cesare had no moral qualms holding him back he would stop at nothing to make sure his little sister had the very best of everything life had to offer.

Like most of the noble women of her time Lucrezia was married young for political advantages to Giovanni Sforza. It was a typical loveless marriage that eventually had to be undone because it no longer had any benefits to the Borgia family. Her father could give her a divorce or her jealous brother could just murder him with out any consequences. A divorce will set her free but all of that was put on hold when in a traumatic turn of events Lucrezia sought refuge in a convent because she was whole heartily sick of all the murderous intrigue that was dealt by the hands of her family. Her father did not want her to take the nun’s vows and repeatedly sent messengers to try and coax her out of the convent. Surprisingly Lucrezia had found some comfort in the most impossible of places. She fell madly in love with her father’s messenger and life outside of the convent walls began to call her back. Lucrezia had come to the nunnery with the hope of escaping one scandal yet she managed to created another one entirely of her own doing. Lucrezia now had a secret and it was due to be on its way shortly. Her choices from that moment on would give way to heartbreaking consequences that even her loving Cesare could not protect her from.
4/5 Another lovely Plaidy novel, she really did have a gift for making messy historical situations seem logical. There was no incest in Plaidy’s version of the Borgia’s. Her view on the dynamics between Lucrezia and Cesare to me was way more plausible than incest. I cannot wait to read the next novel on Lucrezia “Light on Lucrezia” to finish her story. I would highly recommend this novel to historical fiction lovers new to the house of Borgia because Jean Plaidy is always a good place to start.

R-Rating for Violence and Sexual Reference.
FTC-This novel is part of my personal collection.
Amazon: MADONNA OF THE SEVEN HILLS by Jean Plaidy