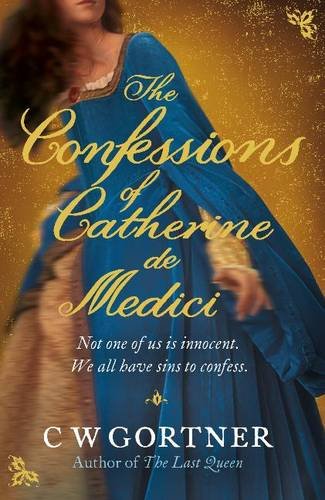 UK Print of The Confessions of Catherine De Medici, signed

"The truth is, none of us are innocent. We all have sins to confess.

So reveals Catherine de Medici in this brilliantly imagined novel about one of history’s most powerful and controversial women. To some she was the ruthless queen who led France into an era of savage violence. To others she was the passionate savior of the French monarchy. Acclaimed author C. W. Gortner brings Catherine to life in her own voice, allowing us to enter into the intimate world of a woman whose determination to protect her family’s throne and realm plunged her into a lethal struggle for power.

The last legitimate descendant of the illustrious Medici line, Catherine suffers the expulsion of her family from her native Florence and narrowly escapes death at the hands of an enraged mob. While still a teenager, she is betrothed to Henri, son of François I of France, and sent from Italy to an unfamiliar realm where she is overshadowed and humiliated by her husband’s lifelong mistress. Ever resilient, Catherine strives to create a role for herself through her patronage of the famous clairvoyant Nostradamus and her own innate gift as a seer. But in her fortieth year, Catherine is widowed, left alone with six young children as regent of a kingdom torn apart by religious discord and the ambitions of a treacherous nobility".


"In the wake of King Henry VIII's death, England’s throne is left in a precarious state-as is the peculiar relationship between his two daughters. Mary, the elder, once treasured, had been declared a bastard in favor of her flame-haired half-sister, Elizabeth, born of the doomed Anne Boleyn. Yet the bond between the sisters was palpable from the start. Now reinstated, Mary eventually assumes her place as queen. But as Mary’s religious zeal evolves into a reign of terror, young Elizabeth gains the people’s favor. Gripped by a tormenting paranoia, Mary is soon convinced that her beloved Elizabeth is in fact her worst enemy. And the virginal Elizabeth, whose true love is her country, must defy her tyrannical sister to make way for a new era...
A brilliant portrait of the rule of "Bloody Mary” and her intricate relationship with Elizabeth I, the adored "Virgin Queen,” here is a riveting tale of one family's sordid and extraordinary chapter in the pages of history".