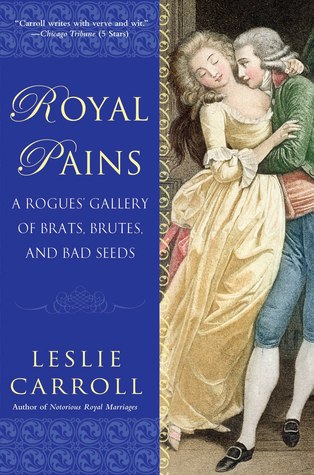 I used to read a lot more non-fiction but that was before I had the blog and before all the wonderful offers of some of the best unreleased historical fiction around. I diligently keep up on Leslie Carroll and her non-fiction works no matter what. I do this not because Leslie is one of the coolest women I have been lucky to encounter while blogging it is mainly because I genuinely enjoy Leslie’s witty style. She is hilarious and I love that her good sense of humor shows through in her work. Her works always make me laugh.

“Royal Pains” named that way with good reason; it is a most fitting title. In Leslie’s newest release she focuses on historical persons who can be labeled as a “Royal Pain”. You are probably curious as to what would constitute a person as a qualifying royal pain? Well to start you had to be of some standing in the world and you had to be a constant thorn in the royal rose bush so to speak. My favorite royal pain that was featured was the “she wolf” Lettice Knolly's of sixteenth century England. Royal pain was an understatement in Lettice’s case because she was a thorn in Elizabeth I’s side ever since she arrived at her to court. Lettice’s parents were Queen Elizabeth’s most devoted courtiers from the very beginning of her rein and continued to be the rest of their lives.

Leslie nailed Lettice’s person with the best analogy I have ever read: “in looks and manner she is your majesty’s doppelganger”, her majesty being the one and only virgin queen Elizabeth I. Elizabeth and Lettice were cousins but not by choice and Lettice really did see herself on the same level as her royal cousin. In Lettice’s inevitable down fall from court she managed to connived her way into entrapping her royal cousins lifelong favorite Robert Dudley and earned herself not only permante banishment from court but the new title of “she wolf”. Besides being “Elizabeth doppelgänger” this one phrase that I have to quote made me laugh so hard I almost fell out of my chair; “The she-wolf became persona no grata at court” which is putting it nicely. In the end Lettice got her just desserts but even in her death she still had to make sure she slighted her cousin queen Elizabeth I.

With chapters on some of history’s biggest bad boys and girls like Richard III, Vlad the impaler, Ivan the terrible, Elizabeth Bathory who was dubbed the blood countess, Archduke Rudolf, Pauline Bonaparte, and Prince Albert Victor. Leslie Carroll made sure she shed light on hundreds of years of notorious persons who were big pains in the royal booty if you ask me.

5/5 I love it that I got to read about new people because it is so exciting. I never have time for non-fiction anymore but I have to make sure I make the time for Leslie Carroll works because they are filled with tasty historical tidy bits I can devour in bite sized chucks. Readers if you are in the pursuit of a new avenue of reading this read will catapult you into a whole new area of interesting historical pains that would be excellent to follow up with some more fiction reading. This read confirmed for me that I must explore more on Elizabeth Bathory, and that Ivan the terrible and Vlad the impaler scare the holy heck out of me so much that I am not sure I could stomach a historical fiction read on them. The above mentioned are some of histories scariest bad boys and Elizabeth Bathory is scary as heck too but as my fellow blogger said “do not read Elizabeth, Vlad or Ivan before bed” which I must confirm that. I would love to recommend this read to all history lovers because Leslie Carroll has perfected the mix of humorous commentary mingled with historical facts.
Amazon