The Darker Side of Pre-Raphaelites: Lucrezia Borgia

It seems like the modern worlds newest hot new obsession is the Borgia's and after a bit I research I find that not only are we newly obsessed with Lucrezia but famous Pre-Raphaelite painter Dante Gabriel Rossetti was also obsessed with the Borgia's too especially Lucrezia. Rossetti spent 1851-1859 working on various different works on Lucrezia and in the end he was greatly influenced by artist Algernon Swinburne. 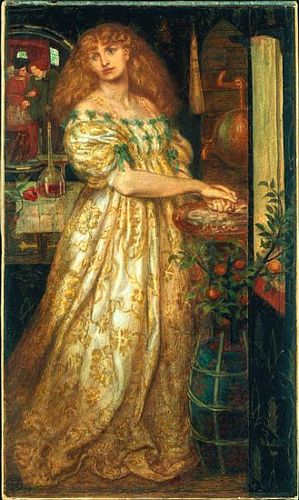 "Here, Lucrezia Borgia is seen in the act of washing her hands--a symbolic gesture to indicate that she had just poisoned her husband. As he so often did, Rossetti has given her a thick neck and masculine-set jaw. Interestingly, her forearms are also very masculine, with prominent muscle definition. This may be due partially to Rossetti's predilection toward masculinizing women, but it is also indicative of her masculine act of murder".

It can also be said that fellow Pre-Raphaelites artist Sir Edward Coley Burne-Jones who at this time worked closely Rossetti followed Rossetti in working on a Lucrezia piece. "Both portrayed strong women in similar physical attitudes and their clothing are extremely similar. It is likely that Rossetti began his piece first".
Though the piece below is not a Pre-Raphaelite I felt it necessary to include the piece because it brings to light some of the darker sides to the Borgia family including Lucrezia. In reality there is no official portrait of Lucrezia so we can continue to let our imaginations run wild. 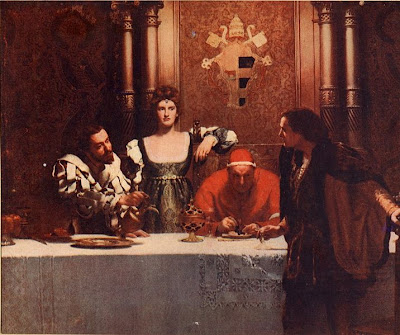 "A Glass of Wine with Caesar Borgia" by John Collier
"Not so holy family: Lucrezia Borgia with father Rodrigo (Pope Alexander VI) and brother Caesare. The figure in the foreground may be a depiction of the messenger Perotto. All three men were rumored to be the father of Lucretia's first son".
Be sure and check out Showtime's new series The Borgias which premiers April 3rd at 9pm ET/PT