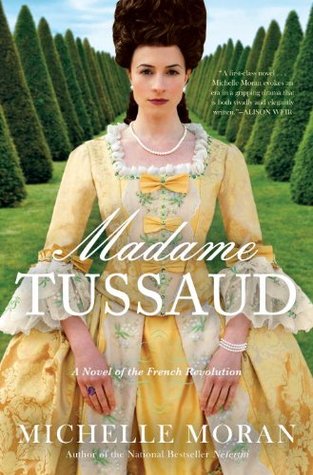 That Michelle Moran, she does such great things I love her to pieces. I have to admit it had been awhile since I last read “Cleopatra's Daughter”. I think I needed a Moran refresher and “Madame Tussaud: A Novel of the French Revolution

” worked wonders for me. One thing I love about Moran is her attention to the key details because it seems like many authors gloss over the things we really want to read about like clothing, and real relevant quotes of the featured characters in the novel. I was a bit skeptical on this one because Michelle has left her normal setting of ancient Egypt for Revolutionary France. Two places really could not be more different as far as historically. But “Madame Tussaud” proved to me that it was not the locations or people of Michelle’s previous novels I loved but her creative writing style because Michelle really has a gift for making you live and breathe her characters’ lives.

Madame Tussaud even today is household name known around the world for her exhibits. She is still known for her realistic wax work figures because in reality no one did the models like Tussaud did them. One part of this read I really enjoyed is this novels soul focus is Madame’s years right before The French Revolution and throughout it. I can honestly say that even though I knew a few fragments about Madame Tussaud I really had no inclination of how much I did not know about her. It was a nice change of pace to read an old story from a new prospective.

Marie Grosholtz “niece” of famous wax worker Philippe Curtis. “Uncle” Curtis got his big start in Paris by doing a model for King Louis XV of his favorite concubine Madame Du Barry and just in case you are wondering Du Berry is still on exhibit today in London. Philippe Curtis ran what we would today call a museum of wax models. What made them so famous was not the person who made them but who they were modeled after. Marie and Curtis worked hard in the exhibits and shared the same talent for making extremely realistic figures of people in wax. Their exhibit would become famous for modeling famous French aristocrats like the Queen Marie Antoinette, the “most beautiful woman in France” Emilie Sainte-Amaranthe, and the most vile, creepy man who the term sadist is derived from the villainous Marquis de Sade. With figures of people who have what we can only now amount to as celebrity status filling her museum it is no wonder that even in hard times people still lined up in droves to see the exhibits.

Prior to the revolution the Queen Marie Antoinette visited the salon and gave her approval of her likeness that Marie had previously created from looking at paintings at the palace. It was during this visit that Marie met the king’s sister devout Princess Elisabeth. Marie and Elisabeth became quick friends and the princess inquired into Marie coming to the palace to give her art lessons. Princess Elisabeth wanted to expand her art horizons and focus on anything besides the current turmoil France was in and wax working was the perfect way to escape. Since the crowds at Marie’s salon never really dwindled down it is only natural that the exhibit took on more of coffee house atmosphere which was all the rage at the time in France. It was where well known influential people of the forth coming revolution would come and call upon Marie’s “uncle” Curtis as their friend. It would happen to be that the salon of wax works would hold friendships with some of the grizzliest men of the revolution. Only they would not find out until it was too late to turn back the clock to a time when Marie still was able to call the royals who had once visited the salon her friends. By day Marie worked with the princess on her art and by night she would host the exhibit slash salon to people like Jean-Paul Murat, Camille Desmoulins, Thomas Jefferson, and Maximilien Robespierre. Marie would walk a fine line between the two worlds until they both came down upon each other in what is hailed as the glorious French Revolution.

5/5 I had no idea Marie was so interlinked with so many influential people of her time. It really surprised me but I think one point or another it surprised her too that people she had come to call friends could have been so ruthless and blood thirsty during the reign of terror. I must mention for you all that this novel could have been bloodier and gorier than it actually was. I respect the fact that Michelle chose to keep the blood and guts at a lower level with class and dignity. I know I say this because the real revolution was scary and bloody as heck and for my sake since I am one of those people that do not sit well with gore that I am glad Michelle was able to find the perfect harmony for Madame Tussaud. I highly recommend this novel for French Revolution enthusiasts because Madame Tussaud was a part of it even if she chose it or not.
Amazon