Guest Post: Lucrezia Borgia: The Most Evil Woman In History... Or The Most Wronged by M. G. Scarsbrook 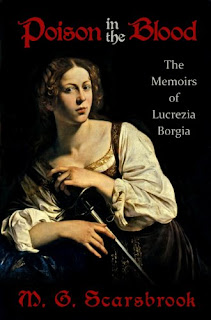 "1497, Renaissance Rome: As the teenage daughter of Pope Alexander VI, Lucrezia Borgia is a young noblewoman immersed in all the glamor of the Vatican Palace. Yet after a brutal killing shocks the city, Lucrezia learns that a dark truth lies beneath the surface of the Papal Court: in their ruthless quest for power, her father and brother are willing to poison their enemies.

Her family are murderers.

After discovering that her new husband is next to die, Lucrezia struggles to help him escape from Rome before the assassins strike. Against a barrage of political intrigues, papal spies, and diabolical tricks, Lucrezia uses all her wits to defy her family and save her husband from assassination. But as tragedy looms ever closer, and her plans gradually fail, she finds herself confronting an enemy far more sinister than she ever imagined…"

I figure there is no better way than to keep up on Lucrezia Borgia than to feature a cool newly released novel on her. Please give a warm welcome to author M.G. Scarsbrook author of the very intriguing novel " Poison In The Blood: The Memoirs of Lucrezia Borgia

Lucrezia Borgia: The Most Evil Woman In History... Or The Most Wronged?
By M. G. Scarsbrook
Once described as the 'greatest whore there ever was in Rome', the legend of Lucrezia Borgia has long captivated people for centuries with wild accounts of her crimes. Some have called her a poisoner, an evil seductress, a femme fatale, and many artists have portrayed her negatively in books, plays, and operas.

But who was Lucrezia exactly? Did she really deserve her poor reputation?

In 1492, when Lucrezia Borgia was still a young noblewoman, her father became Pope Alexander VI and raised her family into one of the most powerful forces in Renaissance Italy. Known for his ruthless ambition, Alexander VI immediately start to eliminate all political enemies in his path, while also elevating his children to prestigious positions within the church and state.

The reign of the Borgias swiftly became the most scandalous era in papal history, marked by constant wars, assassinations, murder, unbridled extravagance, debauchery and allegations of incest. Many political rivals to the Borgias were stabbed, strangled, or poisoned, including cardinals, ambassadors, and the barons of prominent roman families. It was claimed the Borgias dispatched many of their enemies with a custom-made poison called 'Cantarella'. And Lucrezia herself was said to possess a ring with a tiny poison capsule which she used to secretly empty venom into drinks at banquets.

An interesting legend... but is it true?

Probably not. Almost no one in her own time accused Lucrezia of the plots and killings attributed to her family. Nor is there any historical evidence to suggest Lucrezia ever participated in the crimes of Cesare and Alexander. Her contemporaries in Rome merely felt her reputation was tarnished by tales of incest and promiscuity - unlikely allegations made by enemies of the Borgias.

In reality, during her tumultuous life, Lucrezia managed to repair her damaged reputation. After her father died in 1503, and Cesare was soon imprisoned, Lucrezia was no longer used as a pawn to increase the power of the House of Borgia. Instead, she left Rome and married a Duke in the distant lands of Ferrara, quickly settling into her new role as a Duchess. Over time, she reinvented herself as a generous patron of the arts, a loving mother of seven children, and a kind benefactor of many charities. By her death in 1519, many people mourned her loss and she was buried with great honor in the highest church in Ferrara, the disgraceful allegations from her past now long forgotten.

This is the story I explore in my latest novel, Poison In The Blood: The Memoirs of Lucrezia Borgia. Set in Renaissance Rome, during the height of Borgia power, my novel follows Lucrezia's struggle to escape her dangerous family before they destroy her life forever. After discovering that her new husband is next to die, Lucrezia must help him flee the city before the assassins strike. But as tragedy looms ever closer, and her plans gradually, fail, she finds herself confronting an enemy far more sinister than she ever imagined...

Thanks for taking the time to read this today! To learn more about my novels or me, please visit:
Website: http://www.mgscarsbrook.com
Facebook: http://www.facebook.com/authormgscarsbrook
Goodreads: http://www.goodreads.com/author/show/4447495.M_G_Scarsbrook

Thank you M.G. Scarsbrook for a most interesting post on Lucrezia. I am like almost everyone else in the world lately and have become fascinated with Lucrezia's life and thank you for enlightening us on her today.