Please give a warm welcome to the marvelous author C.W. Gortner! I am so excited for this because not only is there an extra special giveaway going for his latest release: The Tudor Secret (The Elizabeth I Spymaster Chronicles) here on Historically Obsessed. But there is much more to go along with it. Now if you absolutely cannot wait to see if you might snag the giveaway copy then you can go to your local bookstore and pick this one up because it hit bookstores on February 1st 2011. Follow this link to check out the giveaway for a signed copy of "The Tudor Secret" and a necklace I designed with the novel as my inspiration. Without further adieu please welcome author C.W. Gortner to Historically Obsessed.

Elizabeth and Robert: A Dangerous Liaison
Elizabeth Tudor, better known to history as Queen Elizabeth I, was unexpected. Her parents, the glamorous Anne Boleyn and formidable Henry VIII, were convinced that the child Anne carried was a long-awaited son. Yet the boy Henry had so yearned for and torn his realm apart to obtain turned out to be a girl, born with what seemed to be a curse writ into her fate. Within three years, Henry would behead her mother and re-marry four times; she’d gain a younger brother, Edward, in addition to her older sister Mary; face a daunting fight for her life that would test her to her core; and would, if the legend is true, fall impossibly in love with one man— Robert Dudley. 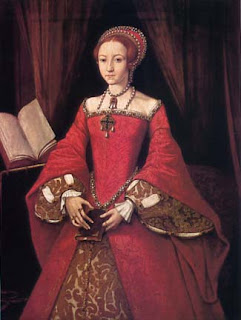 In one of the few portraits we have of Elizabeth in her youth, we see a brittle red-haired princess with spidery fingers—so reminiscent of her mother’s—clad in an ornamental red dress against a curtained backdrop. She stares enigmatically at us, secrets lurking in her dark eyes. Keenly intelligent, arguably as alluring as Anne ever was, this portrait was painted shortly before troubled adolescence catapulted Elizabeth into an ultimately lethal flirtation with Thomas Seymour. It must have been an unforgettable lesson for the impressionable princess of the dangers inherent in her nascent sexuality. Certainly, if she’d harbored any doubts before, nurtured on whispered stories of her mother’s horrifying end, the execution of Seymour proved to Elizabeth that in her world, sex certainly could equal death. 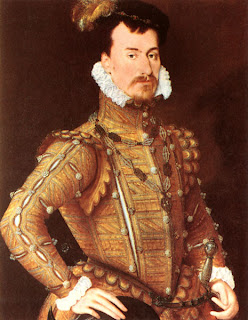 Many believe, however, that when it came to Robert Dudley, this trauma was superseded by inescapable desire. Elizabeth and Robert are inextricably linked, two halves of a fractured whole. They cut their teeth in one of the most treacherous courts in history, witnessing early on the consequences of unbridled ambition or passion. If ever there were two people who should have known better, it was they. Yet their own dangerous liaison lasted a lifetime, epic in its unattainable promise and darkened by rumors of murder and betrayal. Elizabeth knew the price those who courted her could pay; and Robert was the favored son of a family stained by treason. Still, they gravitated to each other like stars on an unstoppable collision course. What drew these two powerful personalities together? 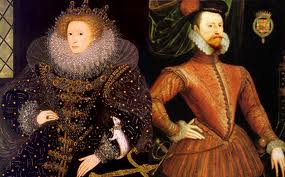 In The Tudor Secret, we meet Elizabeth in her nineteenth year. Four years have passed since the execution of Seymour and she’s a seasoned veteran of the court, wary and fully aware of the perils lurking behind every tapestry. Propelled by concern for her brother King Edward, she’s come unannounced to London to discover why he’s disappeared from the public eye. Robert Dudley’s father, Northumberland, holds sway over the realm and plots to further his iron grip. And Robert, though already wed, burns to achieve what he believes is his right: the heart of a princess. It is a quest that will pit Elizabeth against a tenacious foe and give smoldering birth to a catastrophic love affair that will define her life and haunt the man who yearns to possess her— proving that Elizabeth and Robert remain as fascinating today as they must have been all those hundreds of years ago.

Thank you so much for spending this time with me. To learn more about me and my books, as well as access special features, please visit me at: http://www.cwgortner.com. Happy reading!

Thank you whole heartily C.W. for the wonderful guest post on Elizabeth I and Robert Dudley. As everyone who reads this blog knows: I love me some Robert Dudley. I love their story and it is by far one of my top picks for best love stories of all time.
Amazon