"With fifteen-century Spain rent with intrigue and threatened by civil war, Isabella became the pawn of her ambitious, half-crazed mother and a virtual prisoner at the licentious court of her half-brother, Henry IV.

Was she, at sixteen, fated to be the victim of the Queen's revenge, the Archbishop's ambition and the lust of Don Pedro Giron, one of the most notorious lechers in Castile?

Numbed with grief and fear, Isabella yet remained steadfast in her determination to marry Ferdinand, the handsome young Prince of Aragon, her only true betrothed ..."

Spain for the Sovereigns

"Married to Ferdinand after continual fears and disappointments, Isabella triumphed over every danger, convinced of her true destiny.
With the might of Portugal humbled, the Court of the Sovereigns saw the rise of Torquemada, the establishment of the dreaded Inquisition, and the coming of Columbus who left the woman he loved to make a dream reality.
Ambitious and unfaithful, Ferdinand longed to lead his troops against the Moorish strongholds. Isabella knew a united Spain and a glorious future could be theirs, but they must only share it together..."

"With Spain now united, Ferdinand looked to his daughters to further his ambitions. All too often, Isabella found herself torn between his brilliant plans and her love for her children. During the last years of Isabella's reign it seemed there was a curse on the Royal House which struck at the children of the Sovereigns.
Tragedy followed tragedy - the infanta Isabella, a brokenhearted widow; Juana, driven to madness by her husband's philandering; and the sorrow of parting with young Catalina, destined to become Katharine of Aragon, wife to Henry VIII and Queen of England..."

Best of all Arleigh sent me the one book I needed to complete my Plaidy Tudor series! Thank you Arleigh I love it! To find the cover art below is very hard ever since the most recent re-print was released with the mocha colored gown. 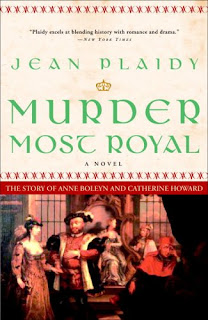 In the court of Henry VIII, it was dangerous for a woman to catch the king’s eye. Anne Boleyn and Catherine Howard were cousins. Both were beautiful women, though very different in temperament. They each learned that Henry’s passion was all-consuming–and fickle.

Sophisticated Anne Boleyn, raised in the decadent court of France, was in love with another man when King Henry claimed her as his own. Being his mistress gave her a position of power; being his queen put her life in jeopardy. Her younger cousin, Catherine Howard, was only fifteen when she was swept into the circle of King Henry. Her innocence attracted him, but a past mistake was destined to haunt her.

Painted in the rich colors of Tudor England, Murder Most Royal is a page-turning journey into the lives of two of the wives of the tempestuous Henry VIII".