HFRT: A Royal Mystery by Author Sandra Worth 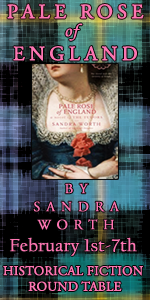 Since it HFBRT event time and this months lovely feature is author Sandra Worth of the new release "Pale Rose of England". To go with the event it is only natural that there be an amazing guest post by Sandra. For more of the event details be sure and check out the HFBRT site. You can also check out our new layout and our poll for first annual awards for 2010 while you are there.

I have to admit "Pale Rose of England

" is probably one of my new all time top favorite picks for historical fiction. It is more than an honor to have Sandra visit Historically Obsessed today and grace us with her prolific post on my favorite unsolved mystery the lost princes in the tower. Richard the Duke of York has enthralled the masses and I am defiantly in there with them so with out further adieu please take it away for us Sandra we are dying to hear more on Richard!

A Royal Mystery by Sandra Worth

Did Richard III really murder the princes, or did someone else murder them? Was a murder even committed? If the princes weren’t murdered, what happened to them?

Historians have considered a wealth of scenarios and a new biography raises a dramatic possibility. That the younger prince, Richard, Duke of York, survived the Tower and was whisked abroad to safety to one day return and reclaim his father’s throne. This new book raised serious doubts in my mind that “Perkin Warbeck” was a fraud as the Tudors claimed, sparking an intriguing idea. What if Perkin Warbeck really was Richard, Duke of York?

I’m not alone in accepting that “Perkin Warbeck” was really who he claimed to be. In 1830, the author of Frankenstein, Mary Shelley, reached the same conclusion. She wrote a novel based on his youthful adventures hiding from Henry VII’s spies. The Fortunes of Perkin Warbeck ends with Richard landing in England. I picked up the tale where hers left off, and Pale Rose of England begins with Richard’s arrival in Cornwall, his beautiful wife and grand passion of his life, the “unforgettable” (RT Book Reviews) Scottish princess, Lady Catherine Gordon, at his side. Pale Rose of England relates their heroic journey to reclaim Richard’s inheritance—his father's crown.

How credible is such a tale? I’d like to present you with some of the reasons—but by no means all!—why the Pretender might well have been the true prince, Richard, Duke of York.

The Pretender was not only the right age, but also of the right appearance, and right education. A contemporary observer found his English, his manners, and his knowledge of the Yorkist court formidable. He displayed a talent for music so extraordinary that it drove King Henry’s court musician to a fever pitch of jealousy. Most remarkably, this talent for music was shared by the younger prince in the Tower and noted by a variety of observers who had met King Edward’s younger son. It is also a talent that seems to have run in the family, since Elizabeth of York was musically gifted.

As noted by a chronicler unfriendly to the Yorkist cause, the Pretender passed as Prince Richard for a very long time, and without a mistake, deceiving everyone. The probability that a false prince could be found who not only resembled Edward IV; who had no history before the age of nine; who could play the part of a prince with aplomb, and who also shared with the younger prince in the Tower a talent for music, is so small that it defies credibility.

The official narrative of the Pretender given under torture contains many elements applicable to the life of the real prince. The two worlds of the Pretender, so far apart, should never have touched, yet they did, time and again. Here is a child who bore the marks of Plantagenet royalty in his strangely defective eye and drooping eyelid; whose name meant “real” and “orphan” in Flemish and French; who was of no known address or clear parentage; who moved all over Europe, always in the company of English people (to explain his fluency in the English language) and who lived for a time in Portugal, somehow managing to attach himself to the wife of one of Edward IV and Richard III’s most loyal retainers—the Portuguese Jew, Duarte Brandeo, known as Sir Edward Brampton. Even Edward IV makes an appearance in “Perkin’s” tale, acting as his godfather. Both the prince and the pauper are linked by a common thread of wandering, jeopardy, and sorrow.

That Henry VII allowed Brampton to be named in “Perkin’s” confession is evidence that this information was too well known to be suppressed, and therefore had to be explained away.

The Pretender was executed for treason, and Henry offered no explanation how someone not born in England could be guilty of treason against an English king. After his death, the Pretender was buried in the Austin Friars reserved for executed nobility instead of being interred with the poor at the church on Bread Street. In this way, and others, Henry VII’s tiny acts of piety suggest that his conscience pricked him. Punishing those who had believed in “Perkin” became an obsession with Henry, and men were still dying for their sympathy for the Pretender many years later.

But it is the behavior of the greatest European monarchs of the age that offers the most convincing evidence that the Pretender was genuine. They either used him as a pawn, championed his cause, or took him under their protection. The King of France refused to deliver him up to the King of England; Isabella and Ferdinand wouldn’t send their daughter to England to marry Prince Arthur while he lived; and the Holy Roman Emperor Maximilian backed the young man without reservation. James IV of Scotland went one better and gave him not only support, but the hand of his dazzlingly beautiful royal cousin, Lady Catherine Gordon, daughter of the Earl of Huntly.

Margaret of York, Duchess of Burgundy, Richard’s strongest supporter, never deserted the one she called her nephew. After his capture, she did everything humanly possible to secure his release. On his death, she mourned profusely, and on the first anniversary of his death, broken-hearted, she burned three times the usual number of candles in her chapel at Binche.

Nor did the Holy Roman Emperor Maximilian of Austria ever abandon him, though the young man could be of no further use. Maximilian did all he could to free Richard, and even considered war against Henry until civil strife in his own land made that impossible. Then he made Henry the astounding offer to resign in perpetuity—for himself, and for Richard, and for all their descendants—their claims to the throne of England! All Maximilian wanted in return was to have the young man back safe, and whole. This is not the way of kings.

Henry refused all Maximilian’s offers. In this, and every possible way, the Pretender’s great rival, Henry VII, behaved as if he, too, believed the young man to be the lost prince, referring to him in private correspondence as the Duke of York and expending vast sums of money to defeat his cause (sixty thousand pounds alone for war with Scotland because James IV wouldn’t relinquish his support of “Perkin”). Nor did he, a miser, seem to mind or to count the cost. He never spent—and was never again to spend—so much money resisting anyone. In his privy purse accounts, the day “Perkin” was apprehended went down as a newsworthy event equal to the announcement of the peace with France in 1492, and the arrival of Katherine of Aragon in 1501.

Was this most intriguing and charming pretender “with the voice of a king” the true prince? A fresh look at the facts of this royal unsolved mystery seems to indicate he was.

About the Author:
Sandra Worth is the acclaimed author of five historical novels chronicling the Wars of the Roses. Each is the recipient of multiple awards and prizes. Her forthcoming novel on Perkin Warbeck is coming Feb 1st. For more info visit www.sandrawoth.com

Thank you Sandra for sharing with all of us your point on Richard Duke of York. I have to admit I am on your side of the fence when it comes to his story. There is just way too many unconfirmed factors that play into his story that I have to believe it was really him and if it was not him I am waiting for someone to prove I am wrong. Anything is possible especially when they say "history is written by the winners".