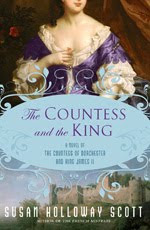 Announcing the Historical Fiction Bloggers Round Table event for September, please give a warm welcome to the wonderfully exciting Susan Holloway Scott to Historically Obsessed.  Susan has graciously written an amazing guest post on the new leading lady of her upcoming release "The Countess and the King" which will be available everywhere September 7th. "The Countess and the King" is this months feature for the Historical Fiction Bloggers Round Table so be sure to check out the group site and other members sites also for other cool posts, giveaways, and much more. Thank you Susan for paying a visit and enlightening us on Katherine Sedley, we are all in high anticipation of the release. With out further adieu please take it away Susan.

Introducing Katherine Sedley,
Countess of Dorchester
By Susan Holloway Scott
At first glance, Katherine Sedley (1657-1717) doesn’t seem like heroine material. In most English history books, she’s not mentioned at all, and even in histories that concentrate on the Restoration (1660-1685), she’ll merit just a footnote if she’s lucky. She didn’t come from a stellar royal family, or one with notable talent or power. She wasn’t a great beauty, or a queen or princess who changed the course of history.
Yet still I made Katherine Sedley the heroine of my new historical novel, The Countess & the King, and in the perverse ways of writing, all those reasons why Katherine shouldn’t merit a book turned out to be exactly the same reasons why she made for such a wonderfully contradictory heroine.  Katherine was always unpredictable, and always determined to go her own way – not something most 17th c. English ladies would dare to do.
Katherine was born the only child of privelged teenaged parents who weren’t much more than children themselves. In another time period, their families would have likely exerted a steadying influence, and seen that the young family followed a responsible path through life. But Katherine was born just before the grim Puritan ways of Oliver Cromwell’s Protectorate were replaced by the much merrier ones of Charles II, restored at last to his throne. With the king’s return, wealthy young aristocrats like the Sedleys flocked to join the free-wheeling court.
Respectability was out of fashion; exuberant excess was the new style, and young Sir Charles became a well-known libertine, famous for drunken debauchery. His young wife, however, remained at home, sinking deep into madness. Against such a background, Katherine’s upbringing reads like something from a modern tabloid. Her father treated her more like an amusing pet than a daughter, taking her with him to playhouses and taverns and introducing her to his notorious friends. She was both adored and spoiled, and learned how to drink, swear, and tell off-color jokes, and was equally comfortable with actresses like Nell Gwyn and with the king himself.  With such connections, and as the heiress to her father’s large fortune, Katherine should have been primed for a splendid dynastic marriage. 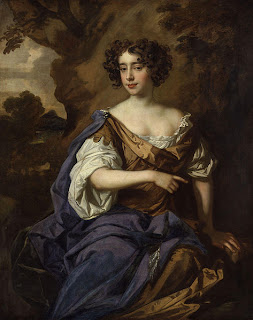 Except, however, for a few sizable stumbling-blocks. First, Katherine was considered shamefully plain. In a court that prized languid, voluptuous beauties, she was pale, thin, and angular, with heavy brows and a wide mouth.  She was also intelligent, her wit quick and sharp. (Her first portrait, by Sir Peter Lely, shows how she didn’t fit the fashionable ideal, yet still captures the sense that she was a lot of fun.) Most of all, she had no wish to wed and give control of her life to a husband. From her own mother to the queen herself, the court was full of neglected, lonely wives, and Katherine was far too independent for that. She had her own fortune, and was determined to choose her own loves.  The first two men she gave her heart to very nearly broke it, choosing prettier women to wed instead, and another who she rejected proved to be a fearsome enemy at court. 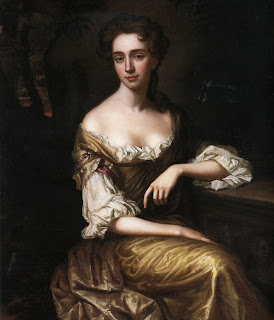 But finally Katherine found a man who appreciated her: James Stuart, Duke of York, and heir to the throne of England. Katherine didn’t care that James was married, or that he was much older, or that the rest of the court regarded him as a poor second in comparison to his brother the king. James found her witty and outrageously amusing and beautiful, and Katherine gleefully gave herself over to the role of a royal mistress. Her portrait by Godfrey Kneller from this time shows her unadorned elegance, her expression seemingly bemused by her good fortune. 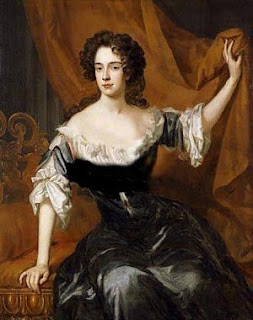 Even as a prince’s mistress, Katherine couldn’t be conventional. She delighted in the scandal she caused, enjoying every moment of it. But the carefree days were short-lived. James had always been a polarizing figure at court, and before long his religious beliefs made him a politically dangerous one as well. Katherine was thrust into the intrigue, torn between her royal lover and England itself, and her cleverness was valuable not for amusement, but for survival. When Charles suddenly died and James became king, Katherine’s position at court grew all the more perilous. The last portrait, by the studio of Godrey Kneller, shows her soon after James has been crowned, and after he has made her Countess of Dorchester. Formally posed on the edge of a gilded bed, lifting aside the bed curtain in a royal mistress’s welcome, her earlier merriment has vanished. Instead she appears reserved and self-contained, as if she already knows the difficult choice before her, a choice that will determine both her fate, and that of The Countess and the King.
Here’s a link to an excerpt from The Countess and the King on my website. I hope you’ll also stop by my blog with fellow author Loretta Chase, where we discuss history, writing, and yes, even the occasional pair of great shoes: Two Nerdy History Girls
Many thanks to Lizzy for having me here today!


Thank you Susan it has been a pleasure and I look forward to seeing what the event holds in store for "The Countess and the King".
HFBRT September Feature 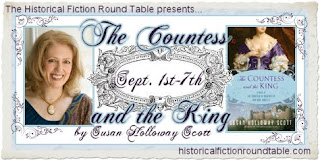 HFBRT Schedule
Amazon Links
The Countess and the King: A Novel of the Countess of Dorchester and King James II

The French Mistress: A Novel of the Duchess of Portsmouth and King Charles II

Royal Harlot: A Novel of the Countess Castlemaine and King Charles II

The King's Favorite: A Novel of Nell Gwyn and King Charles II

Duchess: A Novel of Sarah Churchill