From authors and publishers,

The Rose of York: Fall from Grace

by Sandra Worth, signed copy

"Defying Shakespeare'ss portrayal of Richard III, this prize-winning, well-researched novel concludes the ROSE OF YORK series -- winners of a notable ten awards. Set in Malory's England, it traces Richard's remarkable reign, his passion for justice, and his undying devotion to Anne, and delves into the still-unresolved mystery of his nephews' disappearance. A stirring saga of courage, sacrifice, and love".

The award-winning author of The Four Seasons retells The Odyssey from the point of view of Odysseus and Penelope's daughter.

":With her father Odysseus gone for twenty years, Xanthe barricades herself in her royal chambers to escape the rapacious suitors who would abduct her to gain the throne. Xanthe turns to her loom to weave the adventures of her life, from her upbringing among servants and slaves, to the years spent in hiding with her mother's cousin, Helen of Troy, to the passion of her sexual awakening in the arms of the man she loves.

And when a stranger dressed as a beggar appears at the palace, Xanthe wonders who will be the one to decide her future-a suitor she loathes, a brother she cannot respect, or a father who doesn't know she exists.." 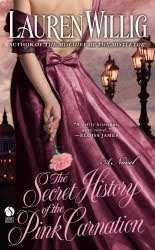 The Secret History of the Pink Carnation

"Nothing ever goes right for Eloise. The day she wears her new suede boots, it rains. When the subway stops short, she's the one thrown into some stranger's lap. And she's had her share of misfortune in the way of love. So, after deciding that romantic heroes must be a thing of the past, Eloise is ready for a fresh start.

Setting off for England, Eloise is determined to finish her dissertation on two spies, the Scarlet Pimpernel and the Purple Gentian. But what she discovers is something historians have missed: the secret history of the Pink Carnation-the most elusive spy of all time. As she works to unmask this obscure spy, Eloise has more and more questions. Like, how did the Pink Carnation save England from Napoleon? What became of the Scarlet Pimpernel and the Purple Gentian? And will Eloise Kelly escape her bad luck and find a living, breathing hero of her own"?