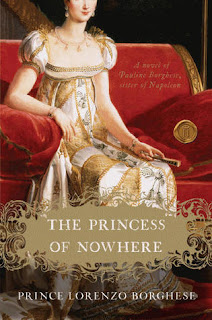 The Princess of Nowhere: A Novel

"Love is never perfect and certainly the relationship between Princess Pauline Bonaparte Borghese—the sister of Napoleon Bonaparte—and Prince Camillo Borghese is no different. Seen through the eyes of the young woman who served as Pauline’s lady-in-waiting and surrogate daughter, the princess was both complicated and straightforward.

Pauline knows that her purpose is to make advantageous marriages to further her ambitious brothers’ goals. But her joie de vivre cannot be stifled—much to the dismay of her new husband Camillo. Constantly seeking the attention of other men, Camillo and Pauline’s relationship is tempestuous at best, especially after a heartbreaking loss. But the love that brought them together can never truly be stifled. Devastated by tragedy, desperate for attention, and searching for answers, Pauline’s life is a study in the excesses of the time and the power of a woman strong enough to defy expectations".

The Pindar Diamond: A Novel

by Katie Hickman
"In Hickman's coincidence-heavy latest (after The Aviary Gate), Paul Pindar, a 17th-century English merchant working in Venice, is obsessed with the Sultan's Blue, a 322-carat diamond coveted by every collector in the plague-ravaged city. Pindar, broke from drinking and gambling, needs the diamond to ransom his captive love from a sultan's harem. Intertwined with his story are those of Sister Annetta, a convent novitiate who alone knows how the Sultan's Blue came to Venice, and Maryam, an acrobat charged with escorting a crippled mute and her deformed newborn (who might be a mermaid) to Venice. When Pindar learns that the Sultan's Blue will be the prize in a high-stakes card game, he desperately tries to scheme his way to the table, going against warnings from fellow traders Ambrose Smith, a covert intelligencer, and John Carew, a friend with his own secret. Though the narrative moves from Pindar to Annetta to Maryam in a frustratingly helter-skelter fashion, Hickman provides a convincing portrait of a troubled Venice that will tide readers over until the story elements click into place just in time for a series of satisfying resolutions".


Austen News
From the lovely Danielle at Sourcebooks


"September 6, marks the official launch of AustenAuthors.com, a labor of love started by two Sourcebooks Landmark authors, Sharon Lathan and Abigail Reynolds. Noticing the success of group author blogs in the romance genre, they decided to gather up some of their fellow Jane Austen Fiction comrades and start a group blog. After putting together some initial plans in August, Sharon and Abigial began to contact Austen authors from all publishers and the final list of 20 contributors is very impressive: