Book Review: FOR THE KINGS FAVOR by Elizabeth Chadwick 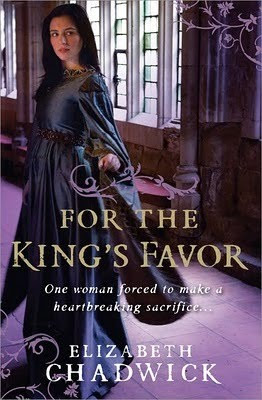 Elizabeth Chadwick once again delivers the goods and I have to place her right up there with Jean Plaidy.  Just like a fine wine Chadwick is to be savored all the way down to the last drop. I have noticed that Elizabeth has a few defining qualities similar to Jean Plaidy; steadiness, unquestionable historical accuracy, and a gift for conveying intricate human psychology. What more could a reader ask for; because it really does not get much better than that. In other words you can not go wrong with any book by Chadwick because you will find nothing short of a world the envelopes you completely.

The youthful and exquisite Ida de Tosney was a ward of King Henry II, one would think she would be under his protection. The predicament was there was no one that could shield her from the king and when he took a fancy to her there was no escape. In my mind the king wrongfully took from Ida what he was not entitled to have. He preyed upon her and left her with no other choice but to be his royal mistress. It was an abuse of power that eventually led to Ida to becoming pregnant. She was not exactly happy with her life when she gave birth to a bouncing baby boy. I do not see how it was possible for her to be happy with King Henry constantly after her.  Sadly Ida’s only escape at the time was her child and she put everything she had into him. Being a forced royal mistress continued while Ida waited for the right time to make a move to get away from the king and Rodger Bigod was just the man she needed to accomplish the task at hand.

Ridger Bigod came from a diverse family home. His father led a rebellion against the king and failed miserably at it. Thank goodness Rodger even as a young man had enough sense to know that what his father asked him to do in the rebellion would lead to no good. He turned on his wolfish father and headed to his mother. This is where it gets interesting. His father had his marriage annulled to his mother when he was a boy and he was forced to stay with his father while his mother left. A bitter rivalry later ensued between his stepmother and way younger half bothers. His father was an evil man but he got his just desserts from the king and the crown seized his title of Earl of Norfolk. When Rodger’s father passed away a short time later it was then that the bitter battle against his surviving relatives for the title of Earl began. Thus leading Rodger to court the king’s favor. To gain a kings favor is a feat in itself but to hold it is a extraordinary feat especially when Ida was making her own plans for the future.  Sadly Ida has to make the hardest choice a mother could ever have to make. One that even I cannot even comprehend having to do and all for the favor of a king.

5/5 This is the third Chadwick read down this year and I just started reading her this past spring. My new bucket list goal is to make sure I read all of Elizabeth Chadwick’s books. She is brilliant with human psychology and it is a real treat when a 500+ page book flies by in what feels like an instant. One very cool feature of these books is they can be read in a row or as stand-alone novels. I loved that this book ties into “The Greatest Knight” and “The Scarlet Lion” but I would say if you have not read any of them then I would do it “For The King’s Favor”, “The Greatest Knight”, then “The Scarlet Lion”. Just in case you were wondering William Marshal is Rodger Bigod’s BFF and YES they both are very sexy husbands.

R-rating for detailed sexual moments.
FTC-this book was sent to me by the publisher for review.

This book is also published under the title "The Time of Singing". "For The Kings Favor' will be available in bookstores everywhere September 1st 2010.

Amazon:
For the King's Favor

The Greatest Knight: The Unsung Story of the Queen's Champion

To Defy a King