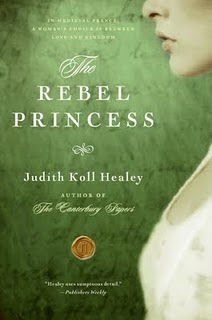 Two power punched reads from Healey in one month, and to think initially both reads flew under my radar. Good thing I was given a heads up on them because both books were a real treat to read and review.

In the first book “The Canterbury Papers” readers follow French princess Alais on a covert mission to retrieve Eleanor of Aquitaine’s secretly stashed papers that were hidden in the Becket's alter in Canterbury cathedral. Of course it was not that easy and after a wildly covert mission Alais found the true love she did not even know she was looking for. After reading both books I realize my favorite aspect of the first book was that it was Alais rediscovering herself and finding what her true purpose in life was to be.

The sequel “The Rebel Princess” kept to the same beat as the first book, which I was hoping it would. I had a prior feeling that if the same elements I so much enjoyed were not there then it could be devastating to me. As far as books go Judith states it best “Romance has to have a hero, a quest, death, and love interest”, which is more than true for me. In my reads I must have those components to hold my interest or I can not finish it. I can say it was everything I ever hoped it could be.

That princess Alais is a favorite of mine. She was such a rebel in every sense of way possible. Book two picks up immediately after the first book left off. Alais is back at her brother the king of France’s court when the light of her life the hunky Templar knight William of Caen. Upon hot William's arrival back at court a fire storm of intrigue blew up in Alais’ face. The issue was to the south of France; the pope wanted the so called “heretics” rising in the south to be handled and if that was going to happen it meant that France would have to step in. Alais’ brother king Philippe would have to take arms up against his own blood cousin the count of Toulouse but wait a second it all did not make since Philippe was the counts overlord. The pope sent his religious henchmen to convince the king of the necessity of going south. Little did they know that Alais had received a heads up about the men of the church from her cousin the counts wife (Eleanor of Aquitaine's daughter) and Alais was more than willing to step in and swing with the big boys in the unscrupulously game of waging a holy war. With a bloody religious war on the event horizon a mystical chalice is stolen and many people go missing. The one person Alais never harm to come to gets snatched up in the night and swept into a sea of intrigue that is filled with dirty politics. Alais is left with no choice but to rebel and get down to the matter of finding her loved ones before harm can come to them.

5/5 loved it; this is the book I am so pissed about. My mom’s dog chewed up the spine of my copy. I loved them both so much that I MUST buy a new one for my collection. This was one of the fastest paced duo’s I have ever read, it is more than enjoyable that both books go deep into detail in the what if factors of Alais’ life. Since we know next to nothing about her I think this fills the nothing void in a bit. I would recommend this highly for medieval fans.

PG-13 Rating- Violence
FTC- Sent to me from publisher

The Canterbury Papers: A Novel