Book Review: HOW TO MELLIFY A CORPSE by Vicki Leon 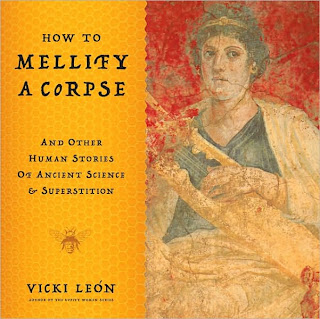 Finally, A tasty non-fiction treat I will not pas out reading. Vicki Leon has written many books but her Uppity Women books are very popular and now I see why. They are hilarious. The first thing that caught my eye is that the book is a unusual size. Her books are smaller and wider and would make a perfect small coffee table book. Even Upitty Women are this size; very cool I know I thought so too.

“How” to Mellify a Corpse” is a compilation of histories oddities that relate to “ancient science and superstition”. Breaking it down by location ancient locations that at one time dominated vast empires. What makes it such a breeze to read through is that the read is broken down into brief three to five small page quick reads. Not only are they short and painless most have depictions that are very amusing along with Leon’s witty modern humor. She gives history a modern view point and breaks it all down to the leftovers from the war that were melted down to make what would become one of the seven wonders of the world: the Colossus of Rhodes. How she knew I wanted to know that I will never know but it is fascinating. Egypt was a amusing section that shocked me on quite a few things.

Some of my favorites were “How to Birth a Bouncing Boy” The ancient practices that were enacted to perform this one was a hoot from weird to just plain non-sense. My top, most unexpected favorite would have to be “The First Surround Sound” because I had no idea that the Greeks designed their theaters that half moon shape way for a reason. Acoustics were a hard thing to master back then and they did it with style and modern thinking with out a stitch of electricity. Taking genius to a whole new level when it came to sound. The raised seats really got me in the theater, I really did not know they had baffles in them to turn it into a surround sound theater. The Greeks were ahead of their time but then again even they more than likely knew that.

4/5 Really liked it, but I am not the typical all the time non-fiction reader. The last non-fiction read I had was back in January of this year. This book is the perfect lure into historical reads, it could ensnare anyone it comes into contact with history buff or not. The fast paced accounts of odd events could be a wealth of conversation in itself.  The type of book that stirs everyone to pick it up and say “hu…this is cool”.

FTC: This book came from Vicki Leon, thank you Vicki I really enjoyed the read.

Email ThisBlogThis!Share to TwitterShare to FacebookShare to Pinterest
Labels: book review, How to Mellify a Corpse, Non-Fiction, Vicki Leon