Finally the Giveaway Winners are here! But first today "How To Mellify A Corpse" by Vicki Leon has official hit bookstore shelves everywhere today and if you did not win a copy here then another very cool aspect of Vicki's books is they are cheep as heck. It is the perfect sneak in book that is easy on the pocket book. I love her books and this one is not to be overlooked. 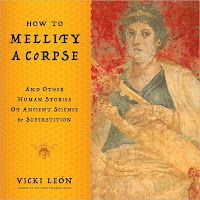 Congradulations to....
Shannon and Pixie13
For winning the two copies up for grabs.

"In this delightful follow-up to IX to V, her entertaining look at work in the ancient world, León explores the tangled webs of science and superstition in Greek, Roman, Egyptian, and other ancient societies. With her characteristic deadpan humor, verve, and wit, she brings to life the practices of ordinary folks as they sought practical ways to avoid the evil eye, battle stronger enemies, and understand strange and marvelous astronomical events. Copulating during a strong north wind and ingesting magical potions were believed to guarantee a male child. Greeks and Romans placed gouty limbs on electric eels in order to ease their pain. Scythian warriors dipped their arrows in snake venom, human blood, and feces to ensure their targets would die a slow and gruesome death. Many ancient cultures touted the antiseptic properties of honey, using honey-soaked bandages to bind wounds. Many Greeks attributed the visions of soothsayers and diviners to "mad honey" made from the nectar of laurel and oleander plants. León™s rollicking tour helps us see that the daily lives and worries of the ancients were not far removed from our own".

"For the King" by Catherine Delors is due to hit bookstores on July 8th which is only two days away. I would encourage any reader who has a basic knowledge of Revolutionary France to jump on this one. It was a page turner that even if I got lost because my lack of background I still enjoyed it. 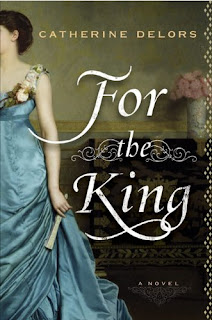 Congratulations to....
Jen For snagging this beautiful book.

"Delors follows Mistress of the Revolution with a gripping historical that chronicles the efforts of a young police inspector to capture the men responsible for trying to kill Napoleon Bonaparte. After a botched assassination attempt on Napoleon kills several bystanders, chief inspector Roch Miquel races to find the men responsible. His investigation is hindered by corruption and jealousy among his colleagues in the police force, notably from Fouché, the stridently unsavory minister of police, who, in order to keep Roch under his thumb, imprisons Roch's father under false pretenses and threatens to have him deported. Meanwhile, Roch finds some comfort in his married mistress, Blanche Coudert, who has a very unfortunate secret that will harshly complicate Roch's already precarious situation. It's not a surprise that Delors's sympathies are with her hero, and his adversaries are depicted as satisfyingly despicable. Themes of class conflict, the messy process of change, and impossible love are nicely woven into the tense central plot of this fast-moving chase through the damp, rutted streets of turn-of-the-19th-century Paris".

Email ThisBlogThis!Share to TwitterShare to FacebookShare to Pinterest
Labels: For The King, giveaway, How to Mellify a Corpse, New Release, Non-Fiction, Vicki Leon, winner