In Stores Today, New Jean Plaidy Re-Print and others Releasing this week 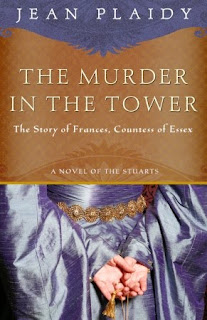 The Murder in the Tower: The Story of Frances, Countess of Essex
July 13 2010

"The dashing Robert Carr is a well-known favorite of King James I. After attracting his attention by falling from a horse in the tilt yard, Robert rises quickly through the ranks. But when the cunning and beautiful Frances Howard comes to court, a very dangerous liaison changes everything.
Married against her will while still a child, Frances emerges from that experience a headstrong force of nature—determined to have her own way, no matter what the consequences. Her attempts to rid herself of an unwanted husband, and later to ensnare a lukewarm lover, have led her deep into the world of spell-makers and poisoners. This is a woman to underestimate at great peril. But not until Robert finds himself ensnared in one of Frances’s plots—imprisoned in the Tower of London and accused of murder—does he learn at last what she is truly capable of". 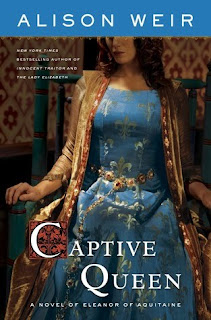 Captive Queen: A Novel of Eleanor of Aquitaine  by Alison Weir
July 13 2010

"It is the year 1152 and a beautiful woman of thirty, attended by only a small armed escort, is riding like the wind southwards through what is now France, leaving behind her crown, her two young daughters and a shattered marriage to Louis of France, who had been more like a monk than a king, and certainly not much of a lover. This woman is Eleanor, Duchess of Aquitaine, and her sole purpose now is to return to her vast duchy and marry the man she loves, Henry Plantagenet, a man destined for greatness as King of England. Theirs is a union founded on lust which will create a great empire stretching from the wilds of Scotland to the Pyrenees. It will also create the devil's brood of Plantagenet's - including Richard C ur de Lion and King John - and the most notoriously vicious marriage in history. "The Eagle and the Lion" is a novel on the grand scale, an epic subject for Alison Weir. It tells of the making of nations, and of passionate conflicts: between Henry II and Thomas Becket, his closest friend who is murdered in Canterbury Cathedral on his orders; between Eleanor and Henry's formidable mother Matilda; between father and sons, as Henry's children take up arms against him; and finally between Henry and Eleanor herself". 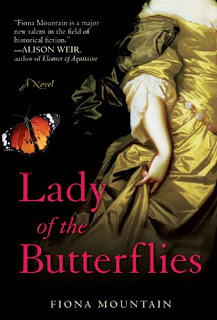 Lady of the Butterflies by Fiona Mountain
July 15 2010

"A lady lepidopterist may seem an unlikely real-life subject for historical romance, but Mountain (Bloodline) makes it work in this first-person account of the life of Eleanor Glanville, the late 17th-century naturalist accused of madness because of her devotion to studying butterflies. Daughter of a landowner, Eleanor grows up not just admiring the natural beauty of the marshy moors around her but also observing and collecting specimens according to the latest scientific methods. Butterflies become her passion even as she marries Edmund Ashfield, to whom she must cede control of her land, and it is Edmond's lack of passion that drives her into the arms of his dashing friend, Richard Glanville, whom she later marries, though neither husband proves as steadfast as the London apothecary with whom she corresponds about science. In later years, Richard and Eleanor's eldest son join forces to have her declared insane in order to gain control over her property so they can drain the wetlands. In fact, drainage—battles over it, the implications of it—is a huge piece of the novel and provides the most original passages of a lush and confidently plotted historical".