Leslie Carroll is so sweet, she shared this juicy bit of information with me about the upcoming release of "Royal Pains A Rogues' Gallery of Brats, Brutes, and Bad Seeds". I know it is a long time to wait but I am sure it will well be worth the wait until March 1st 2011. Thank you for sharing Leslie and I can not wait to read this one. 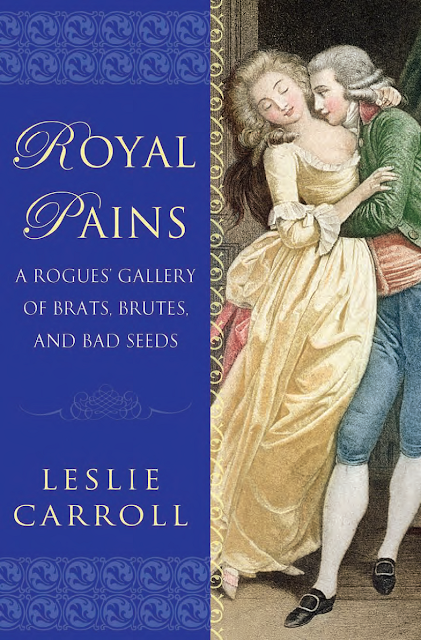 "In a world where sibling rivalry knows no bounds and excess is never enough, meet some of history’s boldest, baddest, and bawdiest royals


The bad seeds on the family trees of the most powerful royal houses of Europe often became the rottenest of apples. In an effort to stave off wrinkles, sixteenth-century Hungarian Countess Erzsébet Báthory bathed in the blood of virgins, and for kicks and giggles devised even more ingenious forms of torture than the über-violent autocrats Vlad (the Impaler) Dracula and Ivan the Terrible had ever imagined. Lettice Knollys strove to mimic the appearance of her cousin Elizabeth I and even stole her man. The Duke of Cumberland’s sexcapades and subsequent clandestine marriage led to a law that still binds England’s royal family. And the libidinous Pauline Bonaparte scandalized her imperial brother by having herself sculpted nearly nude and commissioning a golden drinking goblet fashioned in the shape of her breast.


Chock-full of shocking scenes, titillating tales, and wildly wicked nobles, Royal Pains is a rollicking compendium of the most infamous, capricious, and insatiable bluebloods of Europe".