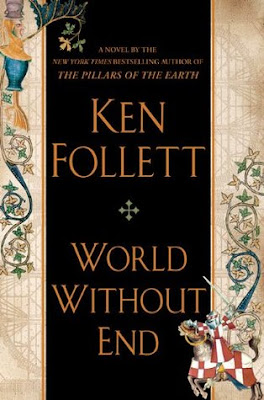 World Without End by Ken Follett
"Eighteen years after the publication of The Pillars of the Earth, Ken Follett has written the the long awaited sequel, World Without End.World Without End takes place in the same town of Kingsbridge, two centuries after the townspeople finished building the exquisite Gothic cathedral that was at the heart of The Pillars of the Earth. The cathedral and the priory are again at the center of a web of love and hate, greed and pride, ambition and revenge, but this sequel stands on its own. This time, the men and women among an extraordinary cast of characters find themselves at a crossroad of new ideas -- about medicine, commerce, architecture, and justice. In a world where proponents of the old ways fiercely battle those with progressive minds, the intrigue and tension quickly reach a boiling point against the devastating backdrop of the greatest natural disaster ever to strike the human race: the Black Death".