Book Review: WAR OF THE ROSES by Conn Iggulden 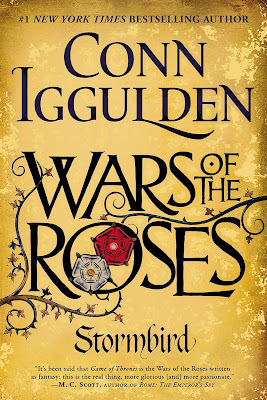 In an era when mental health was left untreated and ruled by fear, King Henry VI of England suffered terribly from an undiagnosed mental disorder. Deemed weak of mind as a youngster, his mental heath was an on going issue his whole life. He was an empathetic pious soul that would have been much happier serving the church rather than becoming the child king of England. Henry’s loyal spymasters governed his realm while he spent his days in his chapel praying for guidance. Derry Brewer was his most trusted spymaster and most faithful servant. The peace of the realm was on everyone’s mind; France was a constant threat to Henrys realm and he would do anything to broker a peace treaty.

Derry did as his king wished and negotiated relentlessly for a peace treaty with the French. The price of peace between France and England was high but Henry would do anything to have peace between the two realms. The English would loose all their lands on the continent except Calais. It was a big loss for the English families that were to be forced from their now French owned lands. England would get its treaty and a new queen in the process, Margaret of Anjou. A fragile peace would be brokered for England at a very high price, which led to the start of the war of the roses.

2/5 I must explain my reasons for such a low rating but first let me explain that I never tear up books I read. My deal is this: if I finished it then I liked it to some degree or I would not have finished it. I try to point out what it was that kept me reading the novel and strive to explain why it was not my cup of tea.  In my opinion I found this novel very long and hard to keep my attention. I did really enjoy the story line but I found the extensive battles and rebellions too long for my taste. For me it is just that this style of historical fiction is geared towards male readers. I say this because this novel focuses on the manly aspects of history like weapons, strategy of battles, and brutally graphic violence. This novel made me realize that I enjoy historical fiction that focuses on feelings, clothing, and have more of a generalized idea of battles that are fought. It took me over a month to read this novel because even though I love this period and the historical figures I just could not get into it. I would recommend this novel to male historical fiction readers.


FTC  - This novel is part of my personal collection.
Amazon War of the Roses by Conn Iggulden