Book Review: AN HEIRESS AT HEART by Jennifer Delamere 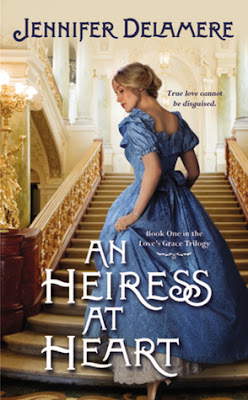 Victorian era Lizzie Poole had made many bad choices in her life but running away to Australia with her brother was not one of them. In Australia the pair met a beautiful couple that would impact their lives deeply. Lizzie and her new friend Ria were each other’s doppelgangers; the resemblance between the two was striking. In a tragic turn of events Lizzie looses everything including her new best friend Ria.  Upon Ria’s deathbed she forced Lizzie promise to return to her family in England and take her place to right all the wrongs Ria had done to her family.

Left with no other choice Lizzie went back to her native England but this time as Ria, Lizzie Poole no longer existed. Upon her arrival Lizzie almost lost her courage to go to Ria’s grandmother Lady Thornborough. In a flash Lizzie was hit by a passing carriage and knocked completely out of her senses.  Almost knocked to death Lizzie was lucky that the man in the carriage had scooped her up out of the street to safety. Coincidently the man in the carriage was Geoffrey Somerville, Ria’s own brother in-law that she had never met. Geoffrey ran Lizzie to the closest friendly home he knew and that was Lady Thornborough’s grand home.  Geoffrey took her to the one place she needed to be.

Before coming to her senses Lizzie is almost immediately taken for Ria by the household staff. Upon waking she confirms to all that she really is Ria the runaway granddaughter of Lady Thornborough. Officially taking Ria’s place meant that Lizzie was now part of London’s elite upper class and not poor Lizzie from the working class. As she comes to and put everything together she realizes that this handsome man that carried her here was actually Ria’s brother in-law making her charade of becoming Ria even more complicated. How long could she keep this up? Her plan was to go on indefinitely as Ria but she suddenly finds herself falling head over heels in love with the one man Ria was not ever meant to have.

5/5 I LOVED this novel. I happened to find this book at my work and was so bored one night that I picked it up and gave it a go. I literally could not put this book down. I read it in two days because the story was more of an adventure than a love story. I would highly recommend this novel because it was romantic in all the right ways with a flare of adventure that added up to a real page-turner.