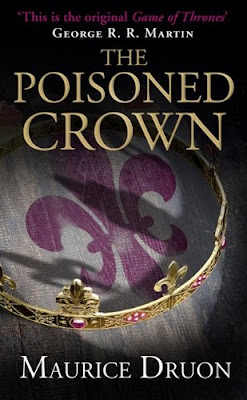 King Louis X of France was a weak king. He inherited none of his father’s noble features. He ordered his first wife strangled and his heart was now set upon his marriage to the beautiful Princess Clemence of Hungary. Her arrival from Italy was a tumultuous sea journey. Her ship barely survived the sea crossing. Married almost on the spot they immediately found themselves in the middle of a blood feud between Robert of Artois and his headstrong aunt Mahaut.  The battle between the two was a never-ending drama fest. Robert was still insisting that his aunt stole his right to rule Artois. Determined as he was Robert would never give up his fight and might end up causing an all out civil war in the process.

As if the fights between Robert and Mahaut were not enough, king Louis decides this was the perfect time to go wager war against Flanders. Failing miserably he retreated home and finds his wife disgruntled over his past discretions. Louis finally opens up to Clemence and tells her everything including the details of his first wife’s death. Clemence being the pious woman demands that does penance for all his dastardly deeds and ends up bringing out Louis’ better nature. Soon after Clemence finds herself with child and the war between Robert of Artois and Mahaut reaches its highest point forcing Louis’ hand. He forces them to peace terms, which left many of the nobles extremely unhappy with the terms and some in disgrace. It was a social war Louis was fighting in his court with no end in sight. Waiting for his child to be born Louis finds the only peace he ever had was with Clemence that is until the Templars curse came back to destroy another member of the Iron Kings family.

4/5 I love this series. All the novels have been short, to the point, brutal and scandalous all in one. This is the third novel in the Accursed Kings series by Druon. I would highly recommend this series but I would not recommend reading this as a stand-alone novel because you will need the back history to make sense of the intrigues of the later novels.

PG -13 Rating for mild violence and sexual references.
FTC- this novel is part of my personal collection