Book Review: A LADY MOST LOVELY by Jennifer Delamere 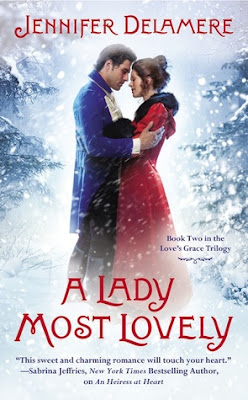 Margaret Vaughn was part of London’s social elite. She put up a good front hiding the fact that her father had died leaving her seriously in debt on the verge of financial ruin. Realizing she had little options of saving her family estate she knew she had to marry into money or loose everything. Her fiancé at the time was a well-bred entrepreneur that would have the resources to bring her back from the brink of finical ruin. Everything was working out as planned until after some careful detective work she found out that her fiancé was a fraud and a liar. Breaking off the engagement Margaret found herself in serious trouble with her debtors.

Tom Poole had freshly arrived from making a fortune in gold mining in Australia. He was struggling to fit in with London’s polite society. His sister Lizzie was forcing him into social circles he was not fond of. The first time he saw Margaret at her engagement ball he knew on the spot that she must be his at whatever the cost. In a coincidental turn of fate Tom barged into Margaret’s home with the intention of rescuing her. The aggressive loan sharks had forced themselves into her home demanding payment of all loans immediately. Being the willful woman that Margaret was she refused Toms offer of help and his hastily stated marriage proposal. Margaret realized that she had no other choice but to strike a deal with him to save her estate. Tom would loan her the funds she desperately needed while putting her families racehorses up as collateral.  There was no denying that she felt a connection to this rough adventure man from Australia. Yet Margaret had always done everything alone and saving her family estate was no different. Tom found he could not give up on her. He knew Margaret was tough on the outside but he was determined to beak down the walls she worked so hard on keeping up.

5/5 LOVED this one too! It was super romantic and I honestly could not tell where the story was going to go. One second she hated him and in another she acted like she loved him. If you enjoy romance with a historical flare I highly recommend this trilogy. This is book is number two in the Loves Grace trilogy.

PG - 13 rating for slight sexual reference
FTC - This novel is from my personal collection.
Amazon A Lady Most Lovely by Jennifer Delamere