Book Review: A BRIDE FOR A SEASON by Jennifer Delamere 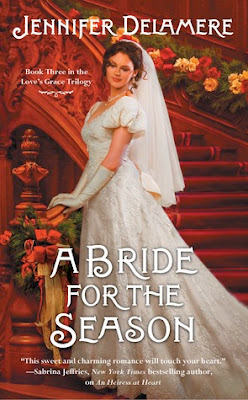 Lucinda Cardington was nothing like the other social butterflies of London’s polite society. Socially awkward Lucinda found herself at parties always wishing she could melt into the walls and disappear. Her little sister Emily on the other hand was her complete opposite. She loved all the girly things in life like dresses, parties, and men. The sisters made social appearances regularly and the Beauchamp ball was another event Lucinda cringed at being forced into going. Emily partied the night away pursuing London’s most eligible bachelor James Simpson. Caring nothing for these events she stole away from the party with a photography book even though her father did not approve of her reading such books. By chance she accidentally crossed paths with James and rekindled their mutual love for photography. Emily was always hot on James heels and she burst in and ruined the moment they shared.

Later that night Lucinda caught Emily sneaking out of her room to surprise James at his scandalous gentlemen’s club. Fearing her sisters reputation would be forever destroyed Lucinda had no other option but to follow her and force her sister to come home before it was too late.  Arriving at the club just in time to see her sister in a secret embrace with James, Lucinda threw a hissy fit to get her sister home. But the whole time a gossip reporter was documenting the whole drama as it unfolded. It would be the top story in the Times gossip column the next morning. To save Emily’s reputation James the long time bachelor decided it was time he settled himself down with a wife. Emily was young and frivolous but he felt in time she would grow to become the woman he really needed yet there was one problem in the way.  The sister’s father had put one condition on the engagement agreement; James must help find Lucinda a husband before he could marry Emily. It would be no easy task and the more time he spent with Lucinda the more he developed feelings for this unique woman.

3/5 Loved this one too but I have to admit the ending was a bit too cheesy for me. I still read it and enjoyed it greatly. This is the third book in the Loves Grace trilogy that I highly recommend for romantic historical fiction lovers

FTC - This novel is from my personal collection.
Amazon A Bride for a Season by Jennifer Delamere