Book Giveaway: Killers of the King the Men Who Dared to Execute Charles I by Charles Spencer 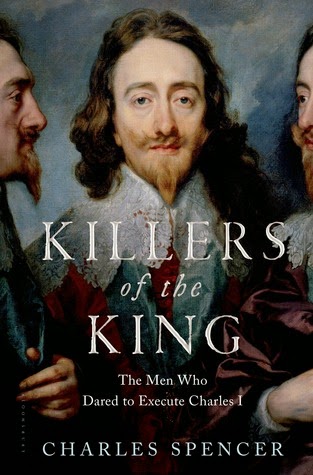 Killers of the King the Men Who Dared to Execute Charles I by Charles Spencer ~ Hardback
"On August 18, 1648, with no relief from the siege in sight, the royalist garrison holding Colchester Castle surrendered and Oliver Cromwell’s army firmly ended the rule of Charles I of England. To send a clear message to the fallen monarch, the rebels executed four of the senior officers captured at the castle. Yet still, the king refused to accept he had lost the war. As France and other allies mobilized in support of Charles, a tribunal was hastily gathered and a death sentence was passed. On January 30, 1649, the King of England was executed. This is the account of the fifty-nine regicides, the men who signed Charles I’s death warrant. Recounting a little-known corner of British history, Charles Spencer explores what happened when the Restoration arrived. From George Downing, the chief plotter, to Richard Ingoldsby, who claimed he was forced to sign his name by his cousin Oliver Cromwell, and from those who returned to the monarchist cause and betrayed their fellow regicides to those that fled the country in an attempt to escape their punishment, Spencer examines the long-lasting, far-reaching consequences not only for those who signed the warrant, but also for those who were present at the trial and for England itself. A powerful tale of revenge from the dark heart of England’s past, and a unique contribution to seventeenth-century history, Killers of the King tells the incredible story of the men who dared to assassinate a monarch".
Book Giveaway: Killers of the King by Charles Spencer
Good luck everyone and happy reading!
S T A Y C O N N E C T E D W I T H M E :
S U B S C R I B E ~ T W I T T E R ‪ ~ F A C E B O O K ~ I N S T A G R A M ~ G O O G L E +‪
~L I Z Z I E~