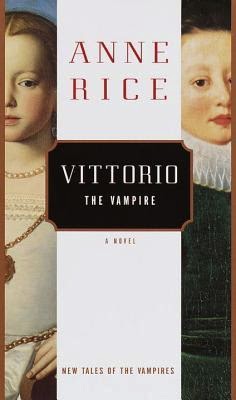 In this last novel of the “New Tales of the Vampires” series we are introduced to a new vampire Vittorio. Vittorio was a young boy on the verge of manhood during the 15th century Italy. His family ruled on high from their mountain top castle in northern Tuscany. His ideal life was shattered in one tragic night of murder. The family castle was invaded in the dead of night by what Vittorio would later find out is the ghastly Order of the Ruby Grail.  Every single man woman and child was murdered except Vittorio. He was the only one spared by the super natural killers. Vittorio fought valiantly to protect his little brother and sister but could not stop these freakishly strong killers from their mission of death.  Spared by the woman who had helped destroy his family Vittorio became obsessed with vengeance and finding out more about this supernatural woman Ursula and the Order of the Ruby Grail.

4/5 I enjoyed a brand new vampire and a new romantic one too! I wish Anne had written more of this branch of the Vampire Chronicles because I would read those too. This one was a short, fast paced read and I enjoyed it. I would recommend this one to historical lovers alike because it does not really tie into any of the other novels in the series, it defiantly can be read as a stand-alone novel.