Book Review: DAUGHTERS OF THE NILE by Stephanie Dray 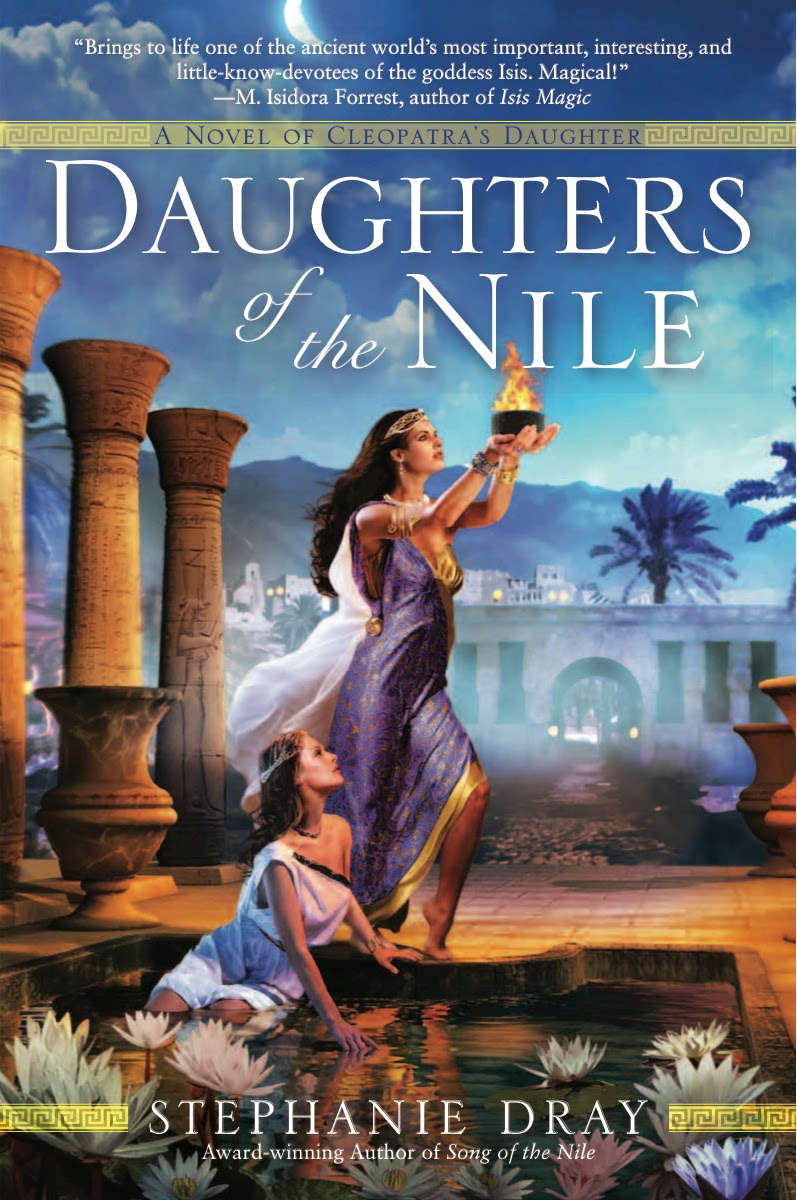 Cleopatra Selene, Queen of Mauretania co-ruled with her husband Juba II over their exotic lands. Named the resurrection by her mother Cleopatra magic had always been a part of their lives. Her mother had magical abilities and so did her little brother and her twin Helios. Cleopatra’s children had met death and destruction at the hands of their Roman captor Augustus Caesar.  Augustus’ obsession with Selene was deranged and she had fought him off in the previous two novels in this series but she could never truly be free of him because she now had a daughter forced upon her by him. Isidora was wholly accepted by Juba as his daughter but it was an unspoken truth behind her conception and paternity that was all done by the hand of the Emperor of Rome.

In this third installment of the “Cleopatra’s Daughter” series we pick up where the last novel left off. Selene is once more free of the emperor for a period of time. Juba and her are still at odds but we find them growing closer together through their past shred struggles. Selene opens her heart to Juba and they welcome a new prince to Mauretania. Name Ptolemy for his Egyptian heritage he is the light of his parents lives until the fateful day when Augustus called them back to Rome to ruin their family bliss back in Mauretania.

Never able to leave Selene alone for too long the Emperor does not just summon her to Rome he commands it and one does not just ignore the emperor of Rome before the common era. Forced to return to the land she stolen away to as a child Selene realizes his obsession with her will never end. Reaching a new height of disillusionment the emperor now has the audacity to think that her sweet little Ptolemy is his son. This is too far for Selene but she is already fighting off her mother enemy King Herod on one front and the disillusioned Caesar with his vile wife working against her in a dangerous struggle for power. Liva has already proved that she is capable of murder and if she were given the chance she would murder Selene in a heartbeat.

Selene had an edge against them all she had magic, the power of Isis and also a gifted daughter to help her navigate the treachery that now surrounded her whole family. Years of fighting had taken a toll on Selene and her son’s birth had its price she was getting older and she found herself more distant from Juba.  Juba was not just any man he was a scholar, a long time favorite of Caesar, and deep down inside he knew he had made mistakes with Selene yet he still loved her. Drawn together the couple could be unstoppable against Rome and anything else that came their way yet they found the hardest obstacle to conquer was the ocean between them.  Selene found she was still not ready to admit how much she truly loved this man she married and instead she chose to fight her battles alone like she always has. Fighting his way into her heart and her battles Selene cannot deny Juba forever.

4/5  I HATE HATE HATE HATE the Emperor; he is the vilest man ever to grace historical fiction. He is like the enemy that cannot die. It sure makes for good reads though. I fell in love with Selene’s daughter Isidora; she was like a combination of her mother and famous grandmother Cleopatra. I would recommend this to historical fiction lovers that do not mind a bit of fantasy in their history. I however would not recommend reading this as a stand-alone novel because you will miss too much of the history behind it all.