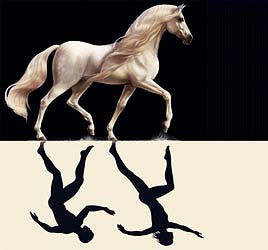 Now showing in Portland Oregon for a very limited time: Cavalia. At their site you can see videos and much much more including show times and ticket pricing.

"Cavalia is a fresh mix of equestrian and performing arts, multimedia and special effects. Conceived by Normand Latourelle and often labelled an equestrian ballet, Cavalia is a spectacular and moving tribute to the relationship between men and horses throughout history, a dream of freedom, cooperation and harmony. In a fairy tale setting filled with poetry and emotion, the show innovatively integrates acrobatics, dance, aerial stunts, live music and equestrian arts. Under the largest Big Top on earth, a 50-metre stage permits the horses to express themselves in all their splendour, nobility and strength, often completely free". 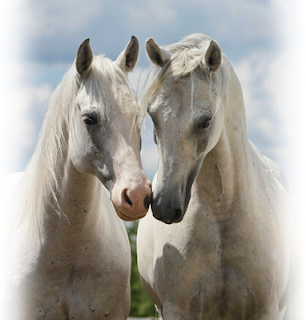 "ARABIAN
Admired for his distinctive thoroughbred profile, large eyes, and high intelligence, the Arabian horse lived among the desert tribes of the Arabian peninsula for thousands of years. Bred by the Bedouins as war mounts, in extreme climatic conditions, the Arabian horse evolved with a level of stamina, energy and unequaled endurance. The breed’s age-old affinity to man is legendary. Arabian horses often shared the tents of their nomadic owners, along with their food and water. Historical figures like Genghis Khan, Napoleon, Alexander The Great and George Washington rode Arabian horses. Beautiful and athletic, the Arabian horse contributed to the evolution of virtually all modern breeds of horses".
~Lizzie~