After Queen Elizabeth I succeeded her hated Catholic sister Mary Tudor, who had come to be known as Bloody Mary because of the hundreds of Protestants who were executed during her reign, mostly by burning at the stake, England became virulently anti-Papist, and practicing Catholic rites was outlawed. There was particular hostility toward and fear of priests, who suspected of rousing their followers to rise against the Protestant queen.

So an Act was passed prohibiting Catholics from practicing the rites of their religion on pain of forfeiture of property for the first offense, a year’s imprisonment for the second, and imprisonment for life for the third. Anyone who refused to take the Oath of Supremacy, stating that the queen was the head of the Church of England, was labeled a recusant, and guilty of high treason. A law was also passed that if a Catholic converted a Protestant to Catholicism, both were guilty of treason and subject to the death penalty. And it was a hanging offense for a Catholic priest to say mass or otherwise practice as a priest. 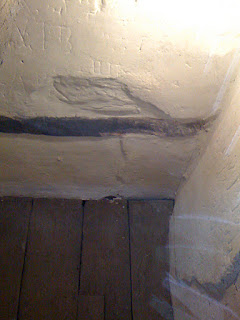 In the early years of Elizabeth’s reign there was some tolerance. Catholics who practiced their faith privately at home were not persecuted. But after a Catholic rising in the north and various “Popish plots,” the laws were more strictly enforced. The perpetual threat posed by and recurring plots involving the Catholic Mary Queen of Scots only made the situation worse. In December 1591 a priest was hanged before the door of a house in Grey’s Inn for having said mass there the previous month.

After the Gunpowder Plot by Guy Fawkes and his conspirators, which aimed to kill the Protestant King James, was discovered on November 5, 1605, anti-Catholic sentiment became even more rabid.

One result of this oppression was that Catholic families began to build into their houses what became known as “priest holes.” These were little chambers, barely big enough to conceal a man, where a priest or forbidden items such as crucifixes could be hidden in case “priest catchers” came searching.

These small spaces were built into the structure of a house in such a way that they were not apparent. They might be sandwiched between the floor of one story and the ceiling of that below it, or constructed like a closet, with the entrance hidden under a staircase or in the paneling of a wall.

Many of these priest holes were built by the Jesuit Nicholas Owen, who devoted much of his life to constructing hiding places in the houses of many of the great Catholic families of England. As one scholar wrote, “he so disguised the entrances to these as to make them most unlike what they really were. Moreover, he kept these places so close a secret with himself that he would never disclose to another the place of concealment of any Catholic. He alone was both their architect and their builder, working at them with inexhaustible industry and labour, for generally the thickest walls had to be broken into and large stones excavated, requiring stronger arms than were attached to a body so diminutive as to give him the nickname of ‘Little John,’ and by this his skill many priests were preserved from the prey of persecutors. Nor is it easy to find anyone who had not often been indebted to his life to Owen’s hiding places.” 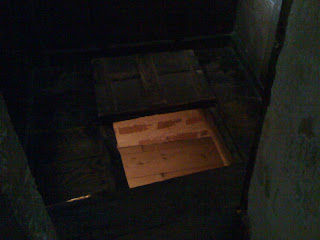 Ironically, many years after Elizabeth’s reign, another class of fugitive made use of priest holes – Royalists fleeing from Parliamentary pursuers dung the Civil Wars. And when the young Charles II narrowly escaped with his life after the Battle of Worcester on September 3, 1651, and spent six weeks desperately trying to get out of England, he was hidden by Catholic families in priest holes at Boscobel House, Moseley Hall, Trent Manor, and Heale House while his friends sought to find him passage to France. 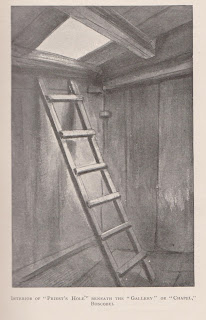 After a day spent hiding in an oak tree behind Boscobel (for the story of the Royal Oak see my post at Lori’s Reading Corner (http://www.lorisreadingcorner.com/2011/11/guest-post-giveaway-with-gillian-bagwell.html), Charles was hidden in one of two priest holes in the house. One is behind the wainscoting of “the Squire’s bedroom.” It is in a chimney stack and has a narrow staircase leading to the basement so the fugitive had a second way out. The other is accessed by a trap door at the top of a flight of stairs leading to the attic. It is about five feet deep and about four feet square – not very comfortable for Charles, who was six feet two inches.

Charles had to take refuge in the priest hole at Moseley, when it was learned that Roundhead soldiers had wind of a Royalist fugitive, possibly the king, and were coming to search the house. This priest hole is under the floor of a closet off the bedroom in which the king had been resting. Apparently a frequent practice was to put a close stool or chamber pot over the hatch into a priest hole, which not only kept it from being seen, but also provided a strong scent that helped throw search dogs off the track of their prey. 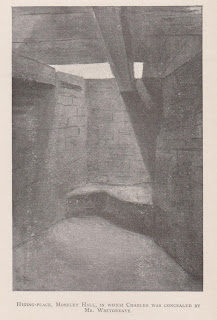 Charles spent a total of fifteen days at Trent Manor in Dorset, staying in Lady Wyndham’s room, which was the most private and removed from the rest of the house, and also had sort of a double priest hole – a closet-sized chamber with a hidden entrance, and then a smaller hiding place in the floor of this closet, accessed by a hatch, from which it was possible to escape down into the brew house chimney.

Charles appreciated the fact that he owed his preservation to many “recusants,” and when he was restored to the throne in 1660, he strove to enact tolerance for religious freedom. But the smoke from the flames at Smithfield where so many Protestants had died, drifted down over the decades. Throughout Charles’s reign anti-Catholic sentiment remained strong, and when he died without a legitimate heir and his Catholic brother the Duke of York succeeded him as James II, the new king was soon ousted in favor of his daughter Mary and her reassuringly Protestant husband and cousin William of Orange. 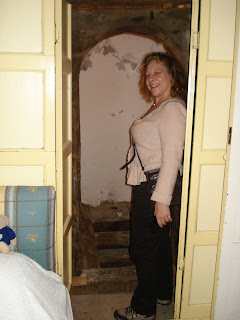 Ironically, it is likely that Charles himself converted to Catholicism on his deathbed. He was visited and ministered to by Father John Huddleston, a Catholic priest who had lived at Moseley and had helped arrange Charles’s shelter and escape in those dark days after the Battle of Worcester.

Primary source: Allan Fea, Secret Chambers and Hiding Places (c. 1900, reprinted by Echo Library, 2008)
Gillian Bagwell’s novel, The September Queen, the first fictional accounting of the story of Jane Lane, and ordinary English girl who helped Charles II escape after the Battle of Worcester, was released on November 1. Please visit her website, www.gillianbagwell.com, to read more about her books and read her blog Jane Lane and the Royal Miracle www.theroyalmiracle.blogspot.com, which recounts her research adventures and the daily episodes in Charles’s flight.
Amazon
The Darling Strumpet
The September Queen
~Lizzie~