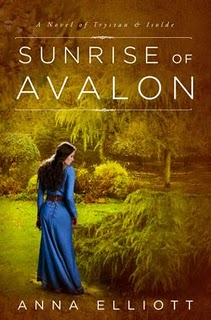 “Sunrise of Avalon” is a compelling take on the tragically romantic Arthurian legend Tystan and Isolde. This excellent trilogy starts with “Twilight of Avalon” (2009), “Dark Moon of Avalon” (2010), and the conclusion “Sunrise of Avalon” (2011) which was well worth the wait. If you have read previous novels on Trystan and Isolde this is not the same or typical spin on them. This trilogy is historical fiction gold for numerous reasons’ the top of them being my most favorite: a novel of two people who belong together but cannot be together because of outside forces that keep pulling them apart, that makes for good historical fiction reads. I am glad I was lured into this trilogy it is a new favorite of mine. Plus Trystan is literally the sexiest man name ever written down.

Trystan and Isolde were childhood best friends that were brought up into a mess of hate, fighting, and terrible things constantly happening. The days of the great king Arthur were violently coming to a close and both of them young as they were still were dragged into the battles of Camelerd with no choice. The fighting never stopped and the few antagonists like Trystan's father Lord Marche just kept stirring the pot and making it worse with every action. Lord Marche was a vile man he would be what we deem today as a woman beater and he later turned rouge lord and made a pack with the only other man as evil as he was Lord Octa of Kent. Octa was everyone’s enemy and he was planning an invasion he wanted to take everything over. He wanted all of England to himself. But Trystan knew he must do something to stop him and even though he and his father’s feud had turned escaladed to a bloody deadly high he still must risk everything to at least try to prevent the inevitable looming battle. With Octa and Marche everyone’s enemy Trystan had his own personal vendetta’s that demanded retribution against the two men.

In book one Isodle had been forced into marrying Lord Marche but in number Octa also had captured her but in three I really enjoyed the fact that Isolde took things in her own hands and made her own terms. She voluntarily went into her enemy Octa’s camp and not just to foil his attempts to kidnap her from her abbey sanctuary Saint Eucherius. This time Isolde had her own plans to infiltrate Octa’s camp and to secretly find high King Madoc of Gwynned’s five year old son and only heir who had been kidnapped. The child was being held as a form of ransom because Octa was not below hurting a child Isolde was his only hope of a way out.

Trystan had left Isolde at the abbey so she would be safe but with Octa always after her it was only a matter of time before he got to her. Isolde never stayed put but who would have guessed she would cross the line into the most dangerous place for her to go: Octa’s camp. Trystan and Isolde both had their own agenda’s for how they were going to sabatosh Octa and Marche before the whole country went to war. It was kill or be killed at this point and Octa had proven he had no qualms about fighting dirty. Isolde had made her choices and she knew she had to protect what was most important to her in the end. She made her choice she had to try and save Trystan even if it was himself who was bringing about his own downfall. Trystan loved Isolde but have you ever heard that song “your love is like a battlefield”? Trystan's love was like a battlefield and to protect Isolde even from himself he never really allowed his love to show. But trying to push it down and away made his love even stronger and even he could not control it in his darkest moments he would find Isolde was the only one that mattered. Isolde and Trystan have to save England from the blood lust lords before they tear all of England asunder before their very eyes but right when it matters the demons of the past keep all of England from healing and moving forward to better times. They must face it and they must do it together or die trying the scary part is the worst enemy is one who knows all your secrets.

5/5 Wonderful Arthurian legend mix. I do not read much on Tystan and Isolde but I have read some short stories and other things but this one is by far the best I have ever come across. I was elated that Elliott made these novels to her own tune and made a mixture of all the different versions of the legends. The ending in this version is the best to date and I know I am not alone in this thought. I do not want to ruin it for anyone but it way caught me off guard. I really enjoyed this series and really identified with Isolde and her inner strength she was one brave woman. I enjoyed this series and have to recommend it to all historical fiction lovers because if you are a sucker for a good love story then this is right up your alley.
Amazon