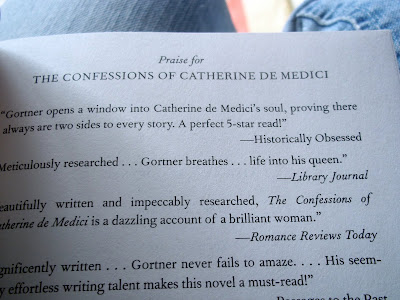 I knew this one was coming but I did not want to get my hopes up. I had heard from C.W. Gortner that on the brand new paperback release of "The Confessions of Catherine de Medici: A Novel

" I was going to have a review quote.  When it released of course I went out and bought a copy. The quote is as follows:


"Gortner opens a window into Catherine de Medici's soul, proving there are always two sides to every story. A perfect 5-star read!" 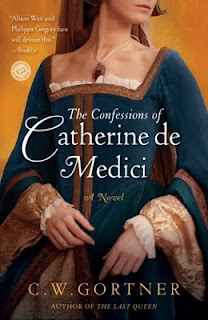 From Amazon:
"Catherine de Medici uses her natural and supernatural gifts to protect the French throne in Gortner's (The Last Queen) portrait of a queen willing to sacrifice happiness and reputation to fulfill her family's royal destiny. Orphan Catherine has her first vision at age 10, and three years later is betrothed to Henri d'Orleans, brother of the sickly heir to the French throne. She heads to France with a vial of poison hidden among her possessions, and after negotiating an uneasy truce with her husband's mistress, she matures into a powerful court presence, though power, she learns, comes at a price. Three of her sons become king in succession as the widow Catherine wields ever-increasing influence to keep the ambitious de Guise clan at bay and religious adversaries from murdering each other. Gortner's is not the first fictional reinterpretation of a historical villainess—Catherine's role in the St. Bartholomew's Day Massacre, for instance, is recounted in a way sympathetic to her—but hers is remarkably thoughtful in its insight into an unapologetically ruthless queen".

I feel honored to be on C.W. Gortner's novel he is a wonderfully gifted author. His novels all have blown my mind away, first with  The Last Queen: A Novel

, then The Confessions of Catherine de Medici: A Novel

, and with The Tudor Secret (The Elizabeth I Spymaster Chronicles)

.  I hope that there will be more to come in the future which brings me to my next thought... 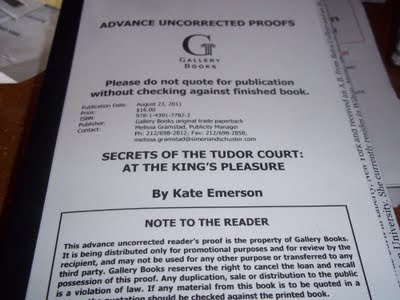 Many of my readers know I LOVE Kate Emerson she is one of the few series authors I read. Kate's series "Secrets of the Tudor Court" is not your typical Tudor series on Anne Boleyn. I am pretty burnt on the Tudors lately and for me to go for a read in the Tudor "area" means it HAS to be a compelling main character. Emerson always picks a side line player of the Tudor court for her main character which is most enjoyable when you read the same stories over and over. Usually it is someone I have heard mentioned in other novels but took a mental note to go back to them later. I have been waiting quite a while for Secrets of the Tudor Court: At the King's Pleasure

and I can not wait to review it but in the meantime my review quotes will have to do. 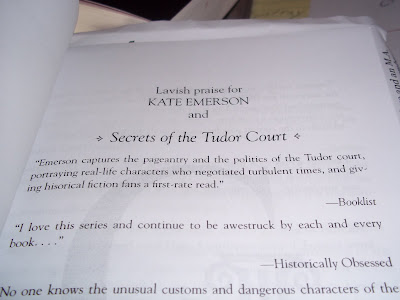 "I love this series and continue to be awestruck by each and every book....." 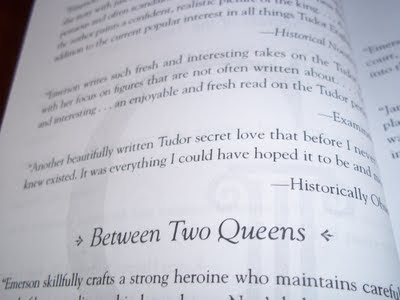 "Another beautifully written Tudor secret love that before I never knew existed. It was everything I could have hoped it to be and more". 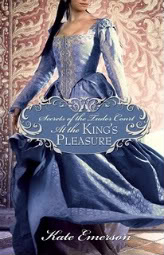 Amazon:
Release Date August 23, 2011
"The fourth novel in Kate Emerson’s well-reviewed series set in Tudor England—based on a real life member of the royal court of Henry VIII. Following the acclaimed By Royal Decree, Pleasure Palace, and Between Two Queens, Kate Emerson again plucks a real figure from history in this lushly detailed tale featuring Lady Anne Stafford—who is torn between her husband and another man.
History remembers Lady Anne Stafford as the woman who cheated on her husband with both King Henry VIII and his companion, Sir William Compton. Lady Anne was indeed in love with two men at the same time….but the king wasn’t one of them. Lady Anne’s complex and heart-wrenching romantic relationships are at the core of this riveting tale that masterfully blends romance, drama, and historical detail as only Kate Emerson can.

From Kate's Super Cool Website:
"At the King's Pleasure is the story of Lady Anne Stafford, younger sister of the 3rd Duke of Buckingham, wife of one man and mistress of another and loving them both. Accused by her brother of allowing herself to be seduced by King Henry VIII, with whom she is most definitely not having an affair, Anne is packed off to a nunnery "for her own good," and from that beginning a tangled web of intrigue and danger ensue".
~Lizzy~