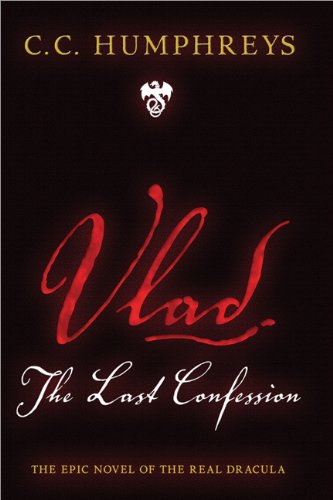 I have got to hand it to author C.C. Humphreys on “Vlad: The Last Confession” he ultimately succeeded in humanizing one of history’s darkest rulers of all time: Vlad the Impaler.

Vlad the Impaler brings to mind many dark thoughts of horrific violent deaths in a dark and devious foreign place but this novel might change that mind set. I looked forward to this novel for many reasons,  one was that my instincts told me this was going to be the perfect novel for me. Typically I cannot stomach anything that has blood and gore as a main focus of the read but I was pleasantly surprised that this novel really was not too bad in the blood department. It did have its moments where I cringed and plowed through quickly to the next setting though. In my mind it was do-able and really not too bloody. This novel is not meant as a confession to the estimated thousands of people he had executed by impalement but more of a spin around for what Vlad’s life was like and how he himself had been through so much at a young age that it was bound to cause irreversible damage. It seemed to me my worst fears with this novel were for Vlad and his person because no one suffered like he was forced to. My empathy for Vlad was surprisingly high. This is the story of a man who had a dream of bringing the law back to his lawless country of Wallachia.

Vlad had his motives and this novel shows them plain as day. When he was a younger boy he was forced to go to the Sultan of the Ottoman Empire: Murad Han as a token of his father’s current loyalty in Wallachia. His little brother Radu also went along with Vlad's most loving companion Ion. Being virtually prisoners in the Sultans domain would set Vlad upon a path of terrible suffering and abuse. Punish or be punished was the scariest motto ever applied at Tokat, Vlad would never forget it either. Vlad was sent to Tokat in Turkey for his “training” but really Tokat was punishment for Vlad helping one of the princes concubines escape to their home land of Wallachia. Ilona was worth it and she would wait for Vlad for as long as it took because he was her only love. It was at Tokat that the most damage to Vlad was done, beatings, forced into torturing the local criminal and the worst of them all was when Vlad was forced into watching up close as the Turks executed a young boy close to his own age by violent impalement. After Vlad's time at Tokat his mind would never be the same again and it would leave a lasting impression on him. Even those closest to him would see the change upon his arrival home.

If it was not one thing for Vlad it was another, Vlad was released from Tokat and it was not exactly a happy time because he was only released because his father and brother had been wrongfully murdered back at home. The sultan needed Vlad to go back home and take over his place as Voivode. When he finally arrived back at home it was to an unstable throne and he was furious with the Wallachian high noblemen, the Boyars. Vlad would fight off numerous attackers of Wallachia, outside forces like Janos the white knight and worst of all his own Boyars who murdered not only his father but his other brother too. They say “an eye for an eye will make the whole world blind” well the Wallachia’s were pro’s at this theory and Vlad took his revenge to a whole another level. He would see justice done for the deaths of his Draculesti family and the Boyars never thought he would go so far to make sure they got their just desserts. It was when he dealt with the Boyar’s he settled to move onto more important things because the truth was Vlad had a bigger fish to fry, the new sultan and arch enemy now Sultan Mehmet II aka “the conquer”. Vlad could never forget that when he left the Sultan’s realm he was given no other choice but to leave behind his younger brother Radu “the handsome”. Radu belonged back at home in Wallachia and nothing was going to stop Vlad from killing Mehmet for what he did and bringing justice to his doorstep.

⅘ This one can quite possible change your mind on how Vlad is portrayed as a brutal leader who fought with terrible violence to fend off the biggest threat of the time: The Ottoman Empire. I swear after you read this one you could never forget Vlad’s history and what could have possibly happened to him. Just imagine if Vlad had never been forced into going to Tokat or sent to the Sultan in the first place, would he have been able to kill so many people in the name of justice? Would he have had the dire drive to kill them all? I guess we will never really know but this novel really appeals to a different side of Vlad I never knew existed. I would highly recommend this novel to readers who can stomach some violence because it does have blood and graphic scenes. But the violence is not the primary focus of the novel
~Lizzy~