News Update: Help Pope Joan Come to the US! 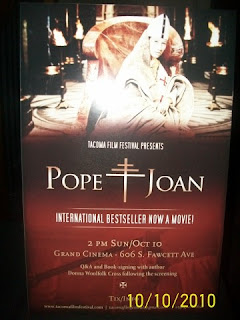 As many of you know this past fall I had the wonderful opportunity to meet author Donna Woolfolk Cross and see her movie Pope Joan. I am still pushing for this movie to be released in the states and I know there are many more other people out in the US who would love to see this movie in their local theaters. I figured I would spread the word on how you can help to make this happen with just a little bit of support.

From Donna Woolfolk Cross:
"The good news is that the film won several awards, including Best Feature Film at the prestigious Ojai Film Festival and also at the Moondance Film Festival, as well as an award for Best Movie Soundtrack at the Park City Film Festival. To learn my take on the film, as well as some "insider" information, see my interview in Moving Pictures Magazine. (Be patient - it could take a few moments to open; it's a .pdf file.)

So now you may be wondering when Pope Joan will come to a theater near you. The good news: the success of the movie on the film circuit helped me wrest the project from the cold dead hands of its U.S. representative (one film festival director, eager to screen Pope Joan, told me he called this group only to be told that they didn't represent the film. They had completely forgotten about Pope Joan--so no wonder we couldn't get U.S.distribution!) We're now seeking a new U.S. distributor, so keep your fingers crossed. Learn how you can help.

Also, readers and fans in Upstate New York might want to save the date of April 2nd. By special permission of Constantin Film, there will be a one-night "Red Carpet Screening" of Pope Joan at the Palace Theater in Syracuse, New York. This will be a gala occasion, thanks to the talents of Tracy Higgenbotham of 5 Star Events, a division of Women TIES, a wonderful company that supports and promotes women entrepreneurs all over the country. All proceeds will benefit the Gage Foundation, a worthy organization that has restored the home of feminist visionary Matilda Joslyn Gage and created an inspiring Center for Social Justice.

Details of the event are still being worked out, so I'll keep you posted--and yes, this means you'll hear from me again soon.

Finally, the issue of ordination of women remains a hot topic. Five Anglican Bishops announced last month that they would join the Catholic Church, responding to the Pope's invitation to Anglican clergy opposed to the ordination of women bishops, something the Church of England is considering. The Pope lured the Anglican Bishops by promising this will never happen in the Catholic Church. But as James Bond learned, never say never..

Last month the National Coalition of American nuns went public in their endorsement of women's ordination, along with Roy Bourgeois, a priest who is expected to be excommunicated by the Vatican because of his support for female priests. Click here to learn more". 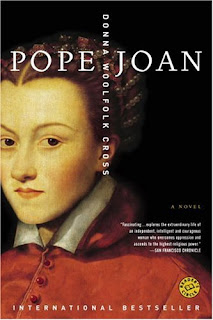 "Cross makes an excellent, entertaining case in her work of historical fiction that, in the Dark Ages, a woman sat on the papal throne for two years. Born in Ingelheim in A.D. 814 to a tyrannical English canon and the once-heathen Saxon he made his wife, Joan shows intelligence and persistence from an early age. One of her two older brothers teaches her to read and write, and her education is furthered by a Greek scholar who instructs her in languages and the classics. Her mother, however, sings her the songs of her pagan gods, creating a dichotomy within her daughter that will last throughout her life. The Greek scholar arranges for the continuation of her education at the palace school of the Lord Bishop of Dorstadt, where she meets the red-haired knight Gerold, who is to become the love of her life. After a savage attack by Norsemen destroys the village, Joan adopts the identity of her older brother, slain in the raid, and makes her way to Fulda, to become the learned scholar and healer Brother John Anglicus. After surviving the plague, Joan goes to Rome, where her wisdom and medical skills gain her entrance into papal circles. Lavishly plotted, the book brims with fairs, weddings and stupendous banquets, famine, plague and brutal battles. Joan is always central to the vivid action as she wars with the two sides of herself, "mind and heart, faith and doubt, will and desire." Ultimately, though she leads a man's life, Joan dies a woman's death, losing her life in childbirth. In this colorful, richly imagined novel, Cross ably inspires a suspension of disbelief, pulling off the improbable feat of writing a romance starring a pregnant pope".