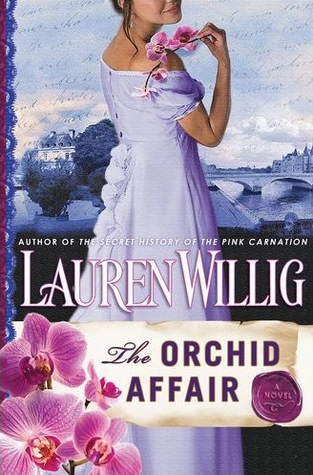 "Pride and Prejudice lives on" (USA Today) in Lauren Willig's Pink Carnation series, which has been hailed for its addictive blend of history, romance, and adventure. In The Orchid Affair, Willig introduces her strongest heroine yet. Laura Grey, a veteran governess, joins the Selwick Spy School expecting to find elaborate disguises and thrilling exploits in service to the spy known as the Pink Carnation. She hardly expects her first assignment to be serving as governess for the children of Andre Jaouen, right-hand man to Bonaparte's minister of police. Jaouen and his arch rival, Gaston Delaroche, are investigating a suspected Royalist plot to unseat Bonaparte, and Laura's mission is to report any suspicious findings.
At first the job is as lively as Latin textbooks and knitting, but Laura begins to notice strange behavior from Jaouen-secret meetings and odd comings and goings. As Laura edges herself closer to her employer, she makes a shocking discovery and is surprised to learn that she has far more in common with Jaouen than she originally thought...
As their plots begin to unravel, Laura and Jaouen are forced on the run with the children, and with the help of the Pink Carnation they escape to the countryside, traveling as husband and wife. But Delaroche will stop at nothing to take down his nemesis. With his men hot on their trail, can Laura and Jaouen seal the fate of Europe before it's too late"?
Lets hear what Lauren has to say on it:
"Coming to a bookstore near you on January 20th, The Orchid Affair is my Sound of Music meets James Bond book. Former governess Laura Grey will do anything to get away from governessing, even if it means apprenticing herself to that elusive floral spy, the Pink Carnation. For her first assignment, Laura goes undercover in the household of Napoleon’s assistant Minister of Police, Andre Jaouen—as a governess. As intrigues swirl around them (and Augustus Whittlesby spouts bad poetry), Laura quickly deduces that there’s far more to Andre than meets the eye….
Library Journal gave The Orchid Affair a starred review, calling it a “supremely nerve-wracking, sit-on-the-edge-of-your-seat, can’t-sleep-until-everyone-is-safe read”. Kirkus Reviews adds, “Willig’s sparkling series continues to elevate the Regency romance genre.”
If you’re in the New York area, please come help me celebrate Orchid’s launch day with a reading and signing at the Borders on 57th and Park at 7:00 on January 20th. I’ll be visiting Washington (DC), Cambridge (the Massachusetts one), New Haven, and Scottsdale in late January and early February".
The Orchid Tour Info
New York, NY
The Orchid Launch!
Reading & Signing
January 20, 7:00
Borders, 57th & Park
Baileys Crossroads, VA
Reading & Signing
January 26, 7:30
5871 Crossroads Center Way
Cambridge, MA
Reading & Signing
January 28, 7:00
Harvard Coop
1400 Massachusetts Ave
New York, NY
Lady Jane's Salon
February 7, 7:00
Madame X, 2nd Floor
94 W Houston Street
New Haven, CT
Reading & Signing
February 9, 6:00
Yale Bookstore
77 Broadway
Scottsdale, AZ
Reading & Signing
February 10, 7:00
The Poisoned Pen
4014 N Goldwater Blvd.
Albany, NY
Panel & Signing
April 2, Time TBA
Empire State Book Festival
Empire State Plaza Convention Center
Pasadena, CA
Reading & Signing
April 7, 7:00
Vroman’s Bookstore
695 E Colorado Blvd
I wish she was coming to Portland Oregon but if you live near any of these locations I am so envious! Please go and have fun for me! If you are obsessed with Lauren like me you can check out Historically Obsessed's Lauren Willig reading challenge 2011. 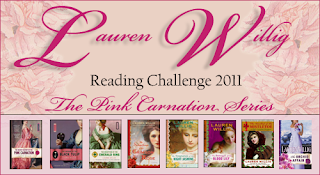