Book Review: TO SERVE A KING By Donna Russo Morin 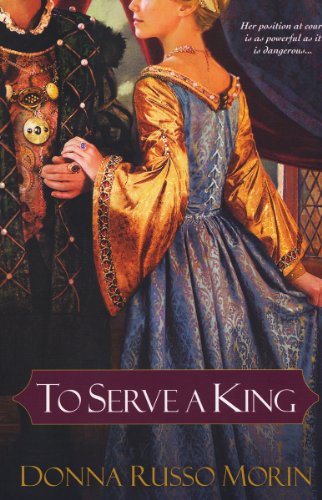 Just released in bookstores everywhere as of January 25th 2011 in paperback this one is meant for the intrigue lovers. “To Serve a King

” delves into the notably renaissance inspired court of King Francis I of France. His court was overflowing with spies, beautiful women, men, and artists. I love the French court and this novel covers many of the aspects I so dearly enjoy reading. I really was fascinated with Donna’s previous novel “The Secret of the Glass

” but I found this novel distinctly different from her previous release. I much enjoyed the change of pace and bravo Donna for adding twists that this must know it all reader never saw coming.

Genevieve Gravois tragically lost her parents in a fire at the glorious once in a millennium meeting of two of history’s most monumental kings of Europe. King Henry VIII of England and King Francois I of France meet in the event known as “the field of cloth and gold” it was meant to strengthen the friendship between the two kings following the Anglo-French treaty of 1514. Left parentless under abnormal circumstances Genevieve is taken in by her aunt who from what I summarized was one of King Henry’s spies. Henry’s brilliant plans for the two year old orphaned child was for her to become his stealthiest and deadliest spy he ever deployed against his longtime friend enemy the King of France Francois I.

When the timing was perfect Genevieve was sent to the French court leaving behind an emotionally frigid aunt on her death bed. The French court was where her duties lie and Genevieve found ease in infiltrating Francois’ most beloved courtier’s lives. Being sent to court under the pretense that her grandmother paid for her a position at court, Genevieve became lady in waiting to the stunning king’s mistress the Duchess Anne de Pisseleau. In France it was customary for the mistress to be the leading lady at court that was nothing new. The mistresses were the ones with all the real power and they possessed more pull than even the queen. Genevieve never expected to become a real part of the elite royal click. No matter what she had a mission to serve her true king and nothing not even the people she grew to love would stand in the way of her duty.

Heart and mind torn asunder Genevieve was torn between two worlds. Turn her back on Henry or love the man she was brought up to despise, she had to make her bed and lie in it. There was only one choice; she had to decide if she was French or English and there would be no going back.

⅘ this month has been a pretty hard month for me and it took me way longer than I expected it would to complete this novel. The book was lovely and I really enjoyed the twists that I never saw coming. I quit smoking this month and have found that one of the hardest things was dividing my time up right since I was not smoking while I reading anymore. The worse was at night I felt so sick from the quit smoking meds that I could not focus at all. It just felt like I was in a fog that had nothing to do with my books but I was determined to quit. Once I shook off the funk I was back on track and really did get into this intriguing novel. It had all my favorites, hot girls, beautiful clothing, stunning locations, passionate love affairs, and best of all a woman with her own mind. If you love historical fiction then this one is a whole new adventurous read that will defiantly shake your reading up a bit. I would recommend this one for all French, Tudor, and historical fiction lovers.