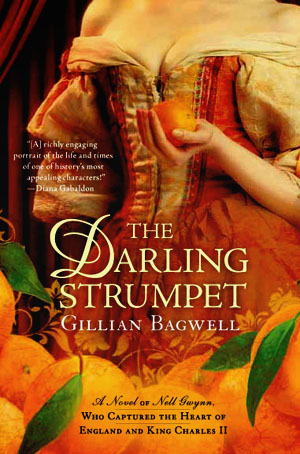 In historical fiction everyone has their top favorites; favorite heroines, favorite time periods, and especially favorite locations. Hands down my favorite rag to riches heroine naturally goes hand in hand with my favorite king of England the legendary Charles II and witty Nell Gwynn. Nelly always has held a special place in my heart and she will stay there indefinitely. You can only imagine how elated I was when I got wind that “The Darling Strumpet: A Novel of Nell Gwynn, Who Captured the Heart of England and King Charles II

” would be hitting bookstores January 4th 2011 which happens to be today.

What a realistically sexually charged read and I mean that in the best of ways possible. This book made me realize that to love Charles II a woman had compete with his “troupe” of mistresses and a whole gaggle of recognized bastards. It is one thing to bed him on his whim but it was a completely different thing to keep his fancy. I now realize that Nell held his heart for so long because she loved him deeply and had to have been one very hot sex kitten in the bedroom. This novel proves that Nelly’s passion lives on even today and like I thought Rochester likes it freaky. “The Darling Strumpet” was a rocking Restoration England read that brought the nasty out in everyone and I whole heartily enjoyed every second of it.

Nell from the beginning lived a hard life of poverty in the 17th century. Her mam ran a bar slash brothel house and poor Nelly was forced into scouring for oysters in the sea and hawking her wares on the street for her livelihood. At this time the level of poverty was at a high point in England and in this life Nell was determined to step up her game and make something of her-self. Even with traumatic events like the plague sweeping London and the great fire of 1666, Nell never stopped picking herself up off the ground and kept moving forward. From violent brothels to charming all of England in the theater stages, Nell managed not only to earn the undying devotion of the people of London but she also captured the heart of the king and kept it.


For all of you Restoration England lovers this book is a must. Really it is a must! What made this book so unique from my past Nell novels you ask? I would have to say it was the sexualization of Nelly. It really was the most in depth novel about what the real hot Nelly was more than likely like than I ever realized it would be. In the end I felt this book was a true complement to Restoration England and Nelly novels.

5/5++++Really GOOD, what a way to start out the new year with a bang. What shocked me the most is this is a debut novel of Gillian Bagwell’s. To go up from what I just read is incomprehensible to me. Really the sky is the limit for Gillian’s future in historical fiction. As many of you know I am obsessed with history and Restoration England is one of my favorite obsessions. In the past year I have had the pleasure of reading numerous novels set in this period and I have to admit that this book in my mind is right up there with the reigning queen of Restoration England novels, Susan Holloway Scott. I must recommend this book to all HF lovers who love the sexually charged bawdiness that was a large part of the social life of Restoration England. I do have to state though that if you are not into reading about sex this is not the novel for you but I can say that Gillian really did cover it with class and dignity.

X-Rating for graphic sexual encounters.
FTC-Book was sent to me by the publisher.