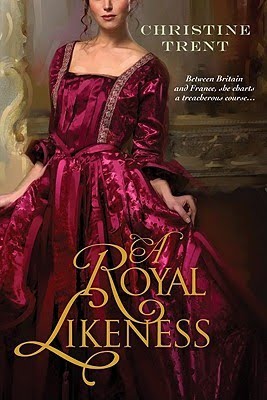 I waited so long for “A Royal Likeness” I thought I was going to die if I was not able to devourer it a.s.a.p. I inhaled one hundred pages in the first night the day it arrived in the mail. Sadly I had to restrain myself and go back to my read I was on first. The one hundred pages I did read gave me a great incentive to push harder to finish my previous one. Sadly the book does not hit bookstores until December 28, 2010 but stay tuned because there will be a giveaway coming up for this one very shortly.

", what possibly is there that is not to like? Romance in by the oodles, morbid wax creations, and hot men in uniforms, not to mention traipsing London, Dublin, and the high seas all with the most accident prone woman in the whole free world Marguerite. In the prequel “The Queen's Dollmaker

” Claudette Laurent was best friends and business partners with Marguerite’s mother and when she suddenly passed away Claudette promised to always keep Marguerite near and dear to her heart. Claudette had fled France and met Marguerite and her mother on a ship bound for England. Together the women struggled and together they worked their tails off to start a doll shop. In “A Royal Likeness”, Marguerite takes over care of the shop with her husband while Aunt Claudette tended to her family and gaily lived the married life in the country.

A beyond random off the wall tragedy hits Marguerite square in the face and like any other person she fled the shop. She never looked back. My heart bled for Marguerite it just was not fair. Losing a much beloved soul mate is devastating to the heart. Some never recover from it and Marguerite could not help the changes in her that the loss of her husband brought on. Plainly she wanted to die and hoped it would come so very soon. I found it rather amusing that when her wicked mother in law paid a visit and brought her vile demands with her the rage in Marguerite was brought on to a boiling point. It gave her enough reason to go on and just because she could she would not listen to her deceased husband’s mother any more.

Slowly the colors came back in her cheeks and she had received word from Aunt Claudette’s friend from France Madame Tussuad. Madame had been in London for some time with her eerie collection of wax figures and had extended an offer to Marguerite to become her apprentice. Marguerite flourished under Marie’s guidance and found that her doll making skills were easily applied to wax figures. Marie was a unique brisk woman that was always about business, she was a true entrepreneur and really was quite an amazing woman. Since Marguerite is accident prone and that can become contagious, it was when the show was taken to the road that everything went to hell in a hand basket.

Honestly I was beginning to wonder if things would ever get better for Marguerite. I seemed as though one tragic event after another plagued her. It was a relief when she went back to London without Marie on a special commission for the Prime Minister. The project was to make a life like replica of war hero Lord Horatio Nelson and one other person of importance.  Marguerite had no idea at first that the wax figures would be used as a military decoy in the upcoming battle with France. The complete the task the last part was the hardest; she had to make sure they got on the right ship in Portsmouth that was battle bound for France. A big mistake on her part because once again Marguerite does it again and ends stuck on Lord Nelson’s ship heading out to sea to do battle. Scary stuff, at least she did have one consolation and was that the handsome officer Hastings who escorted her was on board.

5/5 Loved it loved it. I always love a swoony romance with a quirky heroine who always manages to get herself in trouble. One aspect of this book I never really anticipated was Lord Nelson’s role in the story. An interesting character he was but I was even more pleasantly surprised that his mistress Lady Emma Hamilton made a brief appearance. I would defiantly say this book is filled with intrigue and really there never was a dull moment. Plus like I said about “The Jewel of St. Petersburg”, “A Royal Likeness” has one of the most shockingly romantic endings I have ever read. Highly recommended read to all historical fiction lovers.

For More on Christine Trent:
"The Prince's Pavilion", Coming 2012, from Kensington Book!!!!!!!
Thanks to her patron and great architect, John Nash, Belle Stirling is a rising star in the homes of London’s fashionable elite.  Even the prince regent wants her elegant, high quality fabrics used in the decoration of his new palace, Brighton Pavilion.  But when those closest to her conspire against Parliament, she risks losing her reputation, her business. . .and even her life.
Read an excerpt here.