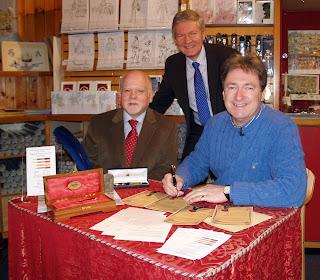 Broadcaster and author Alan Titchmarsh is putting his weight behind the campaign to build a spectacular new £35 million Mary Rose museum, by launching a set of limited edition Mary Rose pens, made from wood found at the Tudor ship’s wreck site.
The Deputy Lieutenant of the County of Hampshire and long term supporter of the Mary Rose Trust, the charity responsible for the conservation and preservation of King Henry VIII’s flagship, today launched the limited edition of 200 pens in time for Christmas.
The Trust hopes to raise £50,000 from the sale of the pens, to help support the work of the Mary Rose and the new museum project.
Only 50 each of four types of hand crafted pen (including a fountain pen, a ballpoint pen, a rollerball pen, and a propelling pencil) have been fashioned from oak, beech, elm, boxwood and poplar timber found on the wreck site of the Mary Rose. However, the wood is not believed to be from the ship or any of her artefacts.
Each limited edition pen is marked with a unique number beginning with “MR”, to signify it was recovered from the Mary Rose wreck site. 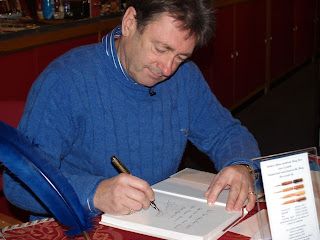 Speaking on the pen launch at Portsmouth Historic Dockyard, Alan Titchmarsh said, “I have always been fascinated by this iconic English wreck. As a resident of Hampshire and the Isle of Wight, I often look across the Solent and think of that fateful day in 1545 when The Mary Rose sank in such mysterious circumstances.  This is a chance for people to get a little closer to those historic, yet tragic, events.”
Deputy Chief Executive of the Mary Rose Trust, Robert Lapraik, added, “We are grateful for all the help we have had to date, but financial support from the public must continue in order to ensure this national treasure is preserved for future generations. We hope people will take this opportunity to buy a truly unique Christmas gift for a loved one and help the Mary Rose secure her rightful place in British heritage.”
David Plummer, who was responsible for handcrafting each of the pens, commented, “I am delighted to have had the opportunity to work on such a distinctive project and to lend support to the Mary Rose in this way. When carving the wood, I was amazed by the unique aroma and at the integrity of the ancient wood.”
The limited edition Mary Rose pens can be ordered from the Mary Rose Gift Shop, Portsmouth Historic Dockyard, 023 9283 9938, at a price of £250 each. They come in a beautiful presentation box, together with a certificate of authenticity signed by Rear Admiral John Lippiett, Chief Executive of the Mary Rose Trust, and David Plummer. 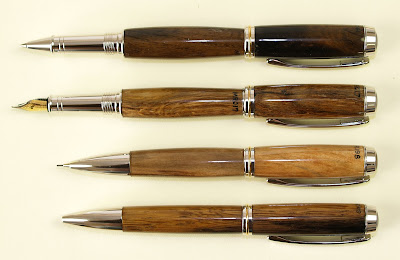 The New Mary Rose Museum , scheduled to open in Autumn 2012, is a major step towards the final chapter in the conservation of the great ship, which began in 1982.  Taking the form of a finely crafted wooden ‘jewellery box’, clad in timber planks, the museum will house the Mary Rose’s fully conserved hull and reunite her with the 19,000 beautifully preserved Tudor artefacts found inside of the wreck.
The existing temporary museum, located 300 metres away from the ship itself, which has space to display only one twentieth of the Tudor items recovered with the wreck, will remain open throughout the construction of the new £35 million museum.
The Trust was awarded one of the largest Heritage Lottery Fund grants ever for the new museum project and has an appeal for £15 million to add to this. They now have a final £3m to raise to complete the appeal.  The Trust receives no central funding and is entirely reliant on donations, along with museum entrance fees and profits from its shop, to reach its ambitious final target.
To help secure the future of The Mary Rose visit www.maryrose.org
Ends
For media enquiries, contact:
Charli Beale, Bell Pottinger Business & Brand
cbeale@bell-pottinger.co.uk
07800 582 266
Or
Stuart Disbrey, Bell Pottinger Business & Brand
sdisbrey@bell-pottinger.co.uk
020 7861 2495
The Mary Rose
The Mary Rose is the only 16th century warship on display anywhere in the world. Launched in 1511, she was one of the first ships able to fire a broadside, and was a favourite of King Henry VIII.
After a long and successful career, she sank during an engagement with a French fleet in 1545. Her rediscovery and raising were seminal events in the history of maritime archaeology.
A dedicated Mary Rose museum in Portsmouth Historic Dockyard, remains open while the ship hall housing the preserved wreck is temporarily closed during construction of the new Mary Rose Museum . The amazing artefacts discovered with the great ship, remain on display and new exhibits, including Hatch, the ship’s dog, are being introduced to maintain the highest quality of visitor experience.
The new Mary Rose Museum will, for the first time since her sinking, re-unite the ship and her contents, fully preserved and presented in a time capsule of Tudor life at sea.