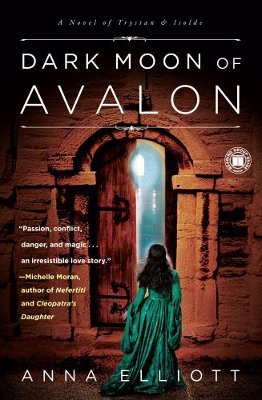 Book two in the Trystan and Isolde trilogy by Anna Elliott recently hit bookstores everywhere. I loved the first book “Twilight of Avalon”, “Dark Moon of Avalon was a wondrous complement to the first book. I am really bereaved I will have to wait until the final book “Sunrise of Avalon” comes out, which is slated for publication in September of 2011. That is such a long way away but I am sure it will be well worth the wait.

One thing about this read that irritated me was how the second book did not immediately pick up where the first book left off. Instead it fast forwarded to five months or so ahead and then gave up the info in bits of flashbacks.  I have to admit that once I got past that part it was fantastic. I love it when the feel of the first book carries over into the second book.

Isolde once high queen now only Lady of Camelerd found that her future was interlaced with her sworn enemy the dredged Lord Marche King of Cornwall. He was a nasty self-serving man that was impeached as high king and was on the run after Isolde unfolded his treasonous plots to hand Brittan over to the Saxons.  Not to mention the harm he did to Isolde personally. In book one he forced her into marriage and almost got her killed on trumped of charges of being a witch.  Since she had him on the run things took a big turn when Marche decided to make new allies with the Saxon King Octa of Kent. Both men were vile and both had one goal in mind and that was to invade Brittan. Their plan was to pillage and kill anyone and everything that stood in their way.

Isolde had to put a plan into action; since she now shared this weird uncontrollable link with Marche. She could see him in the waters and using her gift of sight she just might be able to stop him. Trystan had sought out Isolde right when everything was about to go down because his companion and Isolde’s friend Hereric was gravely hurt and Trystan had no one else he could count to help him. Isolde was the only hope for saving him and Trystan knew it. It was joining of fate that the two of them just happened to cross paths when they did because it was the time that they both needed each other more than they wanted to admit even to themselves. Brittan’s only hope lay with Isolde making an alliance with King Cederic of Wessex but that meant trudging through enemy territory with Trystan. Her only soul desire was to protect Brittan from the invading Octa and Marche but when overwhelming emotions surface for Trystan Isolde finds herself not only trying to save Brittan but the other half to her soul; Trystan.

4/5 liked it, enjoyed it and cannot wait for the last one because everything went down in this one. I can only imagine what is to come in the next one. This one was way more romantic than the first one which I enjoyed but I have to admit the first one is my favorite so far. I do have to add though that Trystan is now on my list of hot historical fiction men.  Would defiantly recommend read both books back to back.