Book Review: THE PRINCESS OF NOWHERE by Prince Lorenzo Borghese 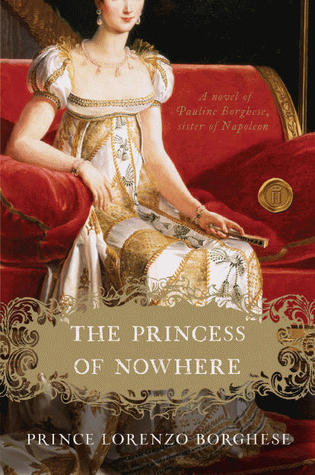 That Pauline Bonaparte sure was an interesting woman. My curiosity has been now officially piqued. What is ironic about Pauline to me is that her brother Napoleon had bossed around most of Europe and yet he held little real control over his sister. In the end Pauline always got what she wanted, even if that meant scandalizing her husband or brother. She never cared about anything unless it was want she wanted.

Lover of men and passionate fashion diva, Pauline Bonaparte was known for her wild sexual encounters and lurid love affairs. Married or not it did not matter to her, when she saw something she wanted she always took it. What was nice about this novel is most of the book the story is written from the point of view of Pauline’s fictitious ward and later lady in waiting Sophie Leclerc. Sophie was the niece of Pauline’s first husband Charles Leclerc who died in Saint-Domingue supposedly from yellow fervor. After her first husband died so suddenly some wild rumors ran rampant that she had taken a lover on his coffin on the long ship ride home. At the age of nine Sophie went to live with Pauline because her parents had died and she had no one else that could care for her. She would spend her early days in Pauline’s nursery growing up with her son Dermide acting the part of the daughter that Pauline never had.

Through Sophie’s eyes readers find themselves living and breathing Pauline and her scandalous ways. There was the good and bad about Pauline she could be almost tender at times and other times wickedly disloyal. In other words she was one of those people you always have to keep an eye on because you never know what they are going to do. The good for me was that hot husband of Pauline’s, Camillo Prince Borghese. The story of their marriage was tumultuous to say the least. Pauline did love him but she was hopelessly faithless and could not be trusted by anyone.

The bad for me was an intangible feeling of something was amiss. I honestly was thoroughly confused about the first twenty six pages. It was around then that the book took a shift onto focusing more on Sophie and it started to flow together more and I found myself fully immersed in it. I do have to admit that I did go back and re-read the first 26 pages and it made a lot more sense. I guess I never got that Sophie is telling the story of Pauline to Camillo’s niece Agnese who is nine. Scary as it is Pauline is not the stuff of childhood bed time dreams. Or maybe it was that Sophie was just reliving it in her memories but really I could not figure out which one it was.

3.5 Why a 3.5 when I just laid out a whole paragraph on what I did not like about it? After I got into it really it swallowed me in and really I had to fight the tears back in the end. I have noticed that not all my reads inspire me to read more on the main characters anymore. “Princess of Nowhere” sent me on a two day long Internet research frenzy. For the most part this book was pretty on the point with Pauline’s history and liaisons. In the end it was a moving novel of a princess that even in death found her beauty immortalized forever.