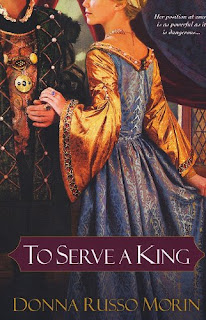 To Serve a King

From her earliest days, Genevieve Gravois has known one fact above all: Francis I, king of France, is her enemy. Raised by her embittered aunt after her parents' deaths, Genevieve has been schooled in things no woman should know: how to decipher codes, how to use a dagger and a bow, and how to kill. For Henry VIII has a destiny in mind for the young girl--as his most powerful and dangerous spy.
When the time is ripe, Genevieve enters the magnificent world of the French court. With grace to match her ambition, she becomes maid of honor to Anne de Pisseleau, King Francis's mistress. Yet neither the court--which teems with artistry and enlightenment as well as intrigue--nor Francis himself are at all what Genevieve expected. And with her mission, her life, and the fate of two kingdoms at stake, she will be forced to make deadly decisions about where her heart and her ultimate loyalties lie. 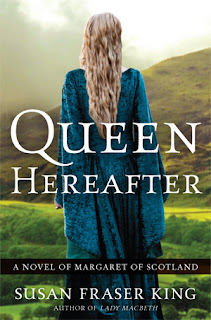 Queen Hereafter: A Novel of Margaret of Scotland

"Refugee. Queen. Saint. In eleventh-century Scotland, a young woman strives to fulfill her destiny despite the risks . . .

Shipwrecked on the Scottish coast, a young Saxon princess and her family—including the outlawed Edgar of England—ask sanctuary of the warrior-king Malcolm Canmore, who shrewdly sees the political advantage. He promises to aid Edgar and the Saxon cause in return for the hand of Edgar’s sister, Margaret, in marriage.
A foreign queen in a strange land, Margaret adapts to life among the barbarian Scots, bears princes, and shapes the fierce warrior Malcolm into a sophisticated ruler. Yet even as the king and queen build a passionate and tempestuous partnership, the Scots distrust her. When her husband brings Eva, a Celtic bard, to court as a hostage for the good behavior of the formidable Lady Macbeth, Margaret expects trouble. Instead, an unlikely friendship grows between the queen and her bard, though one has a wild Celtic nature and the other follows the demanding path of obligation.
Torn between old and new loyalties, Eva is bound by a vow to betray the king and his Saxon queen. Soon imprisoned and charged with witchcraft and treason, Eva learns that Queen Margaret—counseled by the furious king and his powerful priests—will decide her fate and that of her kinswoman Lady Macbeth. But can the proud queen forgive such deep treachery?
Impeccably researched, a dramatic page-turner, Queen Hereafter is an unforgettable story of shifting alliances and the tension between fear and trust as a young woman finds her way in a dangerous world".