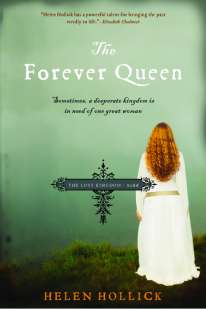 I tend to stay away from ANY book that uses “Æ”. For many reasons, one being I know next to nothing about pre-medieval England. Two my brain will not accept it because all the names with Æ are so similar. I find it really trying to differentiate between one person to the next person when only one letter is different with the Æ in the beginning. I can tell you that “The Forever Queen” was an exception to all the others I have tried before. This is the ONLY one I could finish and honestly really enjoy. It is fun to broaden horizons and this book was just the thing I needed to accomplish that.

Emma, proud and dignified made the realization at a young age that pride was the one thing no one could take from her. Granted they tried but she fiercely held onto it. Emma was sent to England at barely thirteen summers to wed to already reining English king Æthelred “The Unready”. I have a few choice words I could give about that man but I think it would be best to keep them to myself. Worthless does not even cover how his kingship abilities fared. He was a coward and later a woman beater. Sadly how could Emma love a man like that? I know I could not, impossible to say the least.

With England in constant turmoil I have to say this time period is even more complicated than the Eleanor of Aquitaine times. One thing I did not expect was the role the Vikings played in this period of England’s history. The Vikings or “i-Viking” which meant to raid, were constantly raiding England and were always demanding the Viking geld. This basically was a bribe to make them go away, more like a self-imposed tax to me. This is where Æthelred’s cowardice became clear as day. Rather than put up a good honest fight for what was his by birth right he would tuck his tail between his legs and hide from the Vikings and pay the geld.

I really can relate to Emma, she had every right to hate her forced husband and the children he got on her through violence. I do wish she had been more of a protective mother to them when they were adults. They did not ask to be born and it felt like she was punishing them just for that fact they were born. I mean really she abandoned them in exile in Normandy and then married the i-Viking leader Cnut. I found it odd that she went on to start a whole new family and never gave her other children a kind or considerate thought. I cannot blame her on the same taken though she was entitled to at least a little bit of happiness in her life. It does not make it right in my mind though but it does make it understandable.

4/5 I very much enjoyed the read. I had no idea England was that SCARY back in the 11th century. So many people died and in the most tragic of ways. I felt every-time Emma or I got attached to someone they were either brutally murdered or died some horrific accident. In the beginning I hated Æthelred’s son Athelstan but in the end really grew on me just as much as Emma’s second husband Cnut. Amazing as it is Emma was the “first queen to have a bio written”, and her coward first husband Æthelred’s “law making still survives today”. One key piece of information that i felt should have been covered very early on in the read was the word “fryd”. I really had no idea what it meant until the very end of the book in the authors notes. Fryd is the name of the army and had I known that in the beginning it would have made to reading much easier. All and all it was a wonderfully traumatic book that if you think you can conquer the Æ usage then go for it, you will more than likely enjoy the read. This book is an edited re-print of “A Hollow Crown” and the last part of Emma’s life is covered in “Harold the King” which is being re-printed and release on March 1, 2011 under the new title “I am The Chosen King”.