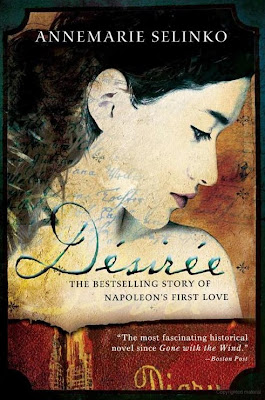 I never would have guessed that before Napoleon loved Josephine there was someone else in his life, someone who played a very important role in the French Revolution. Désirée Clary the daughter of a silk merchant in Marseilles loved Napoleon before he was anything to the French people. She fell in love with him when he was a poor low ranking officer in the military. I knew that Napoleon’s mother Mme. Letizia never really liked her daughter in-law Josephine and now I know why. He was supposed to marry Désirée and I do not think Letizia ever really accepted Josephine for that reason. Napoleon was engaged to Désirée and her sister Julie married Napoleon’s older brother Joseph. It was when Napoleon left Marseilles to go to war and then onto Paris to clear up his military standing that he left Désirée behind. It was one thing to borrow her money she had been saving to buy him a fancy new uniform but to not come back for her that was just too much. Désirée took it upon herself to sneak off to Paris and track him down like the dog he was.

Upon arriving in Paris Désirée knew exactly where to find him. She went to the infamous “La Chaumiére”, Mme. Tallien’s salon where all the important people of France hung out. After being mistaken at the entrance for an escort Désirée was not admitted in until she approached a man in uniform and asked him to be “a part of him”. Désirée quickly discovered the reason Napoleon never came back for her. Josephine, the enchanting Josephine from the saucy island of Martinique was hanging on him. Désirée had the unfortunate coincidence of showing up at the salon at the precise moment that the couple announced their new engagement to each other. Like any other woman who had just found she had lost the only love she knew, she furiously threw her glass of champagne at Josephine’s feet and stormed out into the rain. Wandering Paris in the rain and tears she found herself by the Sein River. Emotionally distraught she tried to climb the fence to throw herself into the river but something held her back. Even I was shocked that when she turned around to see what or who it was: it was the man in uniform at the salon who had saved her two times in one day.

They say what is meant to be is meant to be and it is just fate. It was mean to be that the hero General Jean-Baptiste Bernadotte pulled her off the bridge and saved her life. Jean-Baptiste was a realist; he loved France with every fiber of his being and did his duty to his country which during the times of the revolution was not an easy thing to do with the fractions constantly shifting. After Bernadotte met Désirée by the river she disappeared into thin air. It was not until her brother in law had arranged a special dinner party to impress a heroic general did the two cross paths again. This time though Bernadotte was not going to let her disappear again.

4.5/5 Really really liked it. If there ever was something I did not understand about Napoleon and his life it is covered in this book. He made so much sense in this book that you actually seem to get the insanity that was going around at the time. The French Revolution as I have said before is a complicated time period and sometimes the stories get all mashed up. It is hard to decide where one story starts and one ends because they all blend and link together. This book is not the case at ALL. It makes everything click into place and just make sense of a messy situation. I have to implore anyone who wants to get the full picture on Napoleon and all the amazing people in his life, this book will give you everything you can possibly want to understand in the most unconfusing way possible.

PG Rating, very mild with sexual references and violence
FTC-Book was sent to me by the publisher